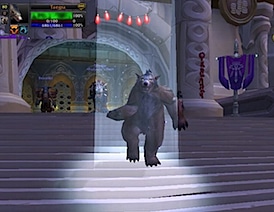 Taegra, our healer druid, hit 80 the on february 27th.

You can see her under the traditional “level 80 jumping around in Dalaran dance”.

Of course, we had to celebrate.

It could also have been called: Suicidal Guild Party.

We started with chocolate cake and shortly after, we were about 10 people jumping from the ramp near the inn of the Exodar. Some of us dying, getting rezzed at the bottom (near the Naaru) and running up again to jump one more time.

Happily, the Exodar was (as usual) mostly empty, so no one of us got commited.

At least four people got the achievement under the happening:

If I forgot any, please tell me.

Grats to Taegra and welcome to the club.

Here is the video of the party, Down with Style: