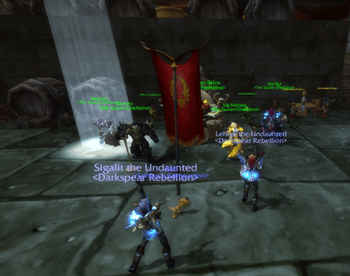 and you can chose only one. When patch 6.0.2 is activated, the mount becomes account-wide and you can buy the other three mounts for gold.

– The reward for Gold is a teleport to each dungeon you have done. Very nice to move quick around. But the teleports share an eight hour’s cool-down unless you actually do the dungeon. Only the character who has done the dungeon will get the teleports.

– And, the big reward for Gold is a full eight-piece set of epic transmoggable gear. These armor sets have unique visual procs when casting certain spells. Only the character who has done the dungeons can have the transmog set. If you lose or vendor pieces of this gear, you can buy it back from Challenger Soong or Challenger Wuli.

Now, neither me nor Nim are found of dungeons. We didn’t even take them heroic. We like PvP, quests, make gold, but not dungeons. We liked dungeons back then, in Lich King time when we were together with some guildies and with a friend-guild (<Godless>). It was cool, we had fun, it wasn’t “gogogogo” and we had time to joke and make fun and there was no ninjas… But except from that, with a group of kids on Red-Bull who just want to “gogogo” and need every second drop. They don’t talk or anything else… It is almost a job and not a pleasure, so we don’t do dungeons.

Therefore, when we say this guy, Fanatik, announcing he was boosting people through Gold for 80,000 gold, we took the offer. “No gearscore necessary, you don’t even have to dps”, he told me.

So I went through with my paladin, Lehiya. I went through twice because the first time, since I hadn’t made one single dungeon heroic, I could not get in. I had to take them all heroic and come back.

My run went pretty okay. There were some mistake and the raid-leader wasn’t always clear in his explanations, but it went okay and I got my achievement Gold, rewards and everything. 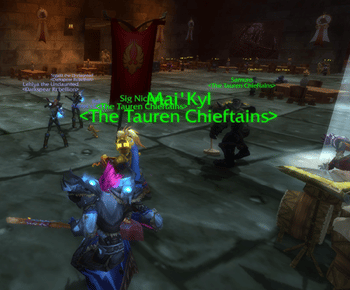 Nim wanted her paladin, Sigalit, to go through too. But since the patch 6 soon hits and the rewards are removed, Fanatik was getting a bit in a hurry and ran the dungeons with two customers: Sigalit and an other.

So her dungeon didn’t go too well since their role was important. I could make mistake and just not DPS if I was in doubt of what to do. She didn’t have the chance. And then, it wasn’t really a boost since she had to play a role. Not very fair when you think that she had to pay 80,000 gold for that.

It took a while, it wasn’t a pleasure and Nim, who hates dungeon, definitely doesn’t like them more after a run like that. It now has good from bad to worse…

Oh well, she ended up getting her rewards, challenger gold, transmog set, title… everything.

So to make her forget the bad experience, Lehiya used her Direbrew Remote, they both went to the Grim Guzzler, got a drink, asked the Tauren Chieftains to play, and they danced while drooling on Sig Nicious (he IS SOOOOOO cute!).

If you want the title, rewards and achievement, on Defias and a couple of other realms, Fanatik is still doing it. He has a thread on WoW forum here, where you can get in touch with him. Just be sure to be the only customer if you don’t want to go through hell, though (don’t say we didn’t warn you)! (Scorpyo)