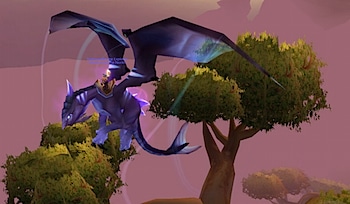 Nathanaelle, level 73 Gnome Mage, got hers in 4 days.

What was the difference?

First of all, I discovered a new quest, that I didn’t know of. I don’t know at all if it is repeatable. As soon as I find out, I’ll update our Nether Drake Mount Guide (on our forum). I’ll find out in a couple of days – so stay tuned.

When you have become Friendly with Netherdrake, you get new quests. One of them is Earning Your Wings that goes over to the Dragonmaw Race.

You have to fly behind different persons and dodge the things they throw at you. You have to follow Murg “Oldie” Muckjaw, Trope the Filth-Belcher, Corlok the Vet, Wing Commander Ichman, Commander Mulverick and Captain Skyshatter.

The race becomes more and more difficult for each.

But at some point in time, Blizzard has nerfed the race.

Before that, if you were hit just once (eventually twice if you were lucky), you fell down and the quest was failed. Today, you can just get hit, you don’t fall (maybe you do if you get hit a lot, I don’t know, I didn’t get hit that many time, but much more than twice, to be honest). The most important thing now is to just keep up with guy, you have to follow.

I remember that when I had to go through the race with my other characters, we were always many waiting for our turn and we very often saw people come back shortly after they left… we knew then, it was a fail. So we /comfort each other, followed and spit on Mulverick and Skyshatter. So frustrating!

But somehow, it was funnier.

If you have taken the Dragonmaw Race before it was nerfed and you didn’t finish it, go to Netherwing Ledge and finish it. It is not difficult at all anymore, you get a reward you can’t use (works only to level 70 and you have to be level 70 to have artisan riding to be able to do the quests) but there is an achievement. So just for the achievement, it is worth doing.

I guess I’ll update the guide on our forum once more.