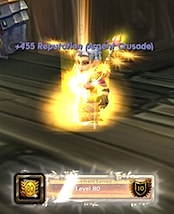 Boss has now 7 level 80s and Morgog is working on his third. Same with Nimrasil, her 3rd level 80 (Laylael, i fact her first character ever) is now level 70 so… more 80’s coming soon.

We will end up having a full raid group of 80’s in Warriors of the North… But only 5 of them in the same time.

Going to plan some kind of party but haven’t find an idea yet.

Problem is to find a moment when Mahsmanigun is online. He did manage to miss his level 80 party with Morgog.