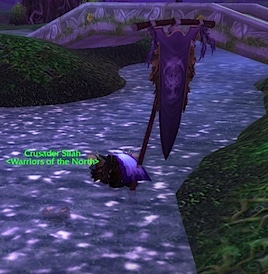 It started in Exodar right after I logged on with my Warrior, Scorpyo. There was this Blood Elf Paladin (Virion) killing vendors.

I wasn’t sure I could take him alone so I went on with my business.

When I went out of the bank, there was this Death Knight Gnome, Forkface, looking at Virion. I stopped and looked. No one was moving.

Forkface just whispered to me: Ready?

As my only answer, I groupped with him and said: r

Then, Virion was totally smashed. We hardly missed health at all. Scorpyo is prot-warrior, so I mainly kept the paladin stunned so he couldn’t heal or do anything while Forkface hit.

A couple of hours later, I was with my rogue, Silah, in Darnassus, doing business…

You wouldn’t believe it, but while I was in the bank (middle of city) I saw “Darnassus is under attack”.

It was an orc hunter, Kezner, right behind the bank.

By chance, I still had my PvP gear on and blades were still poisonned and all. So Kezner got shadowstepped and killed real quick.

I did take a screenshot of his dead body floating into the lake with the nice Darnassus Banner I planted up in his backside.

And then, past midnight, some people were asking for a [For the Alliance] group.

To be honest, it wasn’t a very good group, but it was late sunday night, so I thought it will work anyway. I took my healer, Malka, and off we went.

Only 4 of the raidgroup got Thunderbluff, for some reason, according to the gamemaster to whom I filed a ticket, there was “another group” that hit Cairne first, so meaning the rest of the raid group downed her but she was “gray” for us, and we didn’t get the achievement. 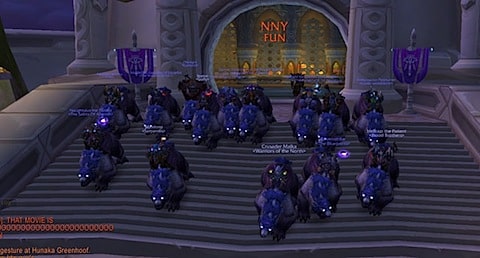 I have difficulties to believe, that 15 players are hitting an NPC and no one notices she is grayed, and the players that had achievement were in our raidgroup. I think there was a bug there, and not a feature, as Blizzard would like me to believe.

While we were downing Thrall, Nimrasil was in Wintergrasp that had started.

And while I got achievement for killing Thrall, Nimrasil was on the winning team of Wintergrasp.

We downed Undercity and Silvermoon without problems.

So the 12th of september was a real black day for Horde: Wherever I met one, he got killed, their leaders got killed and they lost Wintergrasp.

Last night, another from the raid group of [For the Alliance!] of sunday whispered med and asked if we could try it again.

We did, we got a raid group of what… 25 people, got Nimrasil to come with her Druid-healer, Laylael, and we went, and got [For the Alliance!] and the war bear without problems.

Nice and easy 🙂 we can when we want.