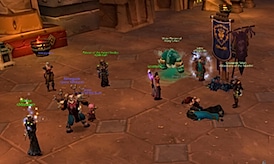 The last couple of morning, they came in small groups in Ironforge to kill AH or bank or guards. This morning at 05:30 and yesterday morning at 04:30.

Maybe they spawn here about once a day?

Yesterday, it was real pros a paladin healer, Charmas, a warrior, Passive and a Death Knight, Bárbs. They were wearing Wrathfull set and seemed quite used to work as team. Loads of experience from Arena, I guess.

When I arrived at Ironforge to do the Brewfest quest, they were here and an Alliance was already dead because he, strangly enough, couldn’t solo them.

I made a couple of calls to wake people up, Alliance is by defiition, pretty tough to wake up. I met one I already had met before (when Malka did her first “For The Alliance”) and we managed to gather a group of 9 people.

Here a real important thing for PvP: Don’t try to kill the healer! Especially not in a team that obviously is used to arenas. You have to pacify the healer: stun, hex, sheep… whatever and then concentrate on the 2 others.

That’s what we did. It was a bit of a mess, though because we didn’t coordinate too well, so healer was sheep but then hit (so sheep disappears).

Most of the group left and they came back. But obviously, some of their buffs had dissapeared, they were died once, so psychologically they saw the possibility of getting killed again, so we took them down again even though we weren’t more than 4.

Then they left. No points for them to stay. Real good players. I was impressed.

Then, this morning, came some Horde from the guild <Misery>, which obviously is a misery!

I almost only met these guys in ganking parties and unless they outnumber you, they are not worth much. One on one with my warrior, or rogue (which is the one I PvP most with) or even my priest, I have killed many of them, and they are stupid enough to keep respawning and give me more honor.

And so did they do today. They were as pityfull as ever and gave my rogue, Silah, non less than 17 kills.

Here comes the exception about killing healer! I never saw a druid-healer go so quickly down as lilmóóboo. I can’t really speak of who was best, but of who was less terrible. I’d say the Orc Warrior, Beatsme, was the one that might have a future in PvP. He was quite okay but couldn’t bear the whole thing of course.

I started to make a group, but it wasn’t even needed to kill them.

Most funny was, that I was at Kharanos (after following Frostyjack), a mage and I killed him there.

Then I sat down and eat and since he died just beside the graveyard, he came to life, got potion and changed to a kvaldir of a kind and while I was on my way back to Ironforge, he deathgripped me.

And Frostyjack, big Death Knight “the Kingslayer” died of the meeting with Silah “the horde-eater-for-breakfeast”.

A Death Knight, with ghoul, with 35k+ health and buffed, got killed by a rogue at 3/4 health… I guess Silah is more difficult to kill than Lich King, he?

To be honest, I had frost fever from his hit and instead of healing myself, I used time to plant banner up his bottom so I died of frostfever right after doing it.

But it was worth it.

The misere didn’t stop there, then they gathered in Kharanos, I passed by them on my way back to Ironforge and they didn’t touch me. Instead, they were killing level 30 guards in Kharanos. I guess it was easier.

They came back to Ironforge then, and got ganked a couple of time more. It took them about 2 hours to understand.

Lot of fun, but I found the first encounter (with Charmas, Passive and Bárbs) much more interesting. The meeting with Misery was, just as usual: fun with noobs 🙂