Nimrasil and Scorpyo sort of grew up together. They started on WoW with a weeks difference, and I even think that Scorpyo and Nimrasil was created on the same day.

Anyway, Scorpyo immediately got ahead of Nimrasil and was always 5 or even 10 levels above.

Many times, Nimrasil would cry out for help, when mobs were killing her over and over again, and “big sister” Scorpyo would come and make things good again. Always wild and with the black hair in a long plait, reaching her waist.

Ah, how we were young, then.

Scorpyo was the first to join a guild. Bloodlust Eternal was inviting, and after a little while (hours? days?) Nimrasil also joined the guild.

For a while both were happy there, but then things started changing in the guild. More and more runs were only for high level members. And guild master was the sweetest person on earth – even to guild ninjas. When new members joined and their first words heard was “how can I take tuff out of the bank?”, he would promote them to elite, and let them take “tuff”.

We didn’t agree on that, but we were only members. 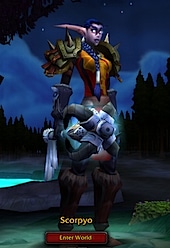 One member didn’t have enough gold to buy a mount, and Scorpyo send 10 gold. Never got a thanks.

Later on, this same member asked for a free guild tabbard (Nimrasil and Scorpyo both paid one gold at lvl 15 for that tabbard), and was told “sure”.

So Scorpyo and Nimrasil left the guild. They wanted to create their own guild in their “image” so to speak.

“Warriors of the North” was up for sale, so Scorpyo bought it.

Then Scorpyo – many months ago – met a daughter and a mother from a guild called Godless. They invited Scorpyo to dungeons and runs. They – and a few other members of that guild – started to give Scorpyo very expensive gifts, like new armor (purple), weapons (purple) with new enchantings and gems.

They asked Scorpyo to join their guild. Scorpyo said no, since Scorpyo was in fact the guild master of the guild we have created.

But now, Scorpyo has left our guild to join Godless.

An era has ended. Well, it was good, while it lasted.

Nimrasil and alts will probably take a break (hours? days? weeks? months?) from WoW to get some distance.

WoW is more than the game. It’s the people in it. And for Nimrasil sharing the guild with Scorpyo meant a lot. It was big sister and little sister. Something essential. A core. (Nimrasil)