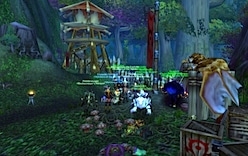 Asterix got to level 80 some times ago, but it wasn’t possible to have the party before december 12th. Asterix couldn’t come before that time and he was kind of a necessary guest to his own party.

The party started a bit sadly because after that Scorpyo had left the guild to go to Godless, there had been some troubles and all the characters were removed from the guild. BlackScorpyo, Silah, Lehiya… Everyone.

The party was in Astranaar and after Silah showed up and provoked Asterix to duel 3 times (and lost the 3 time, but won against Miraculix), BlackScorpyo, that was around showed up.

She came to Nimrasil and just said: “Hand me back my guild”.

Nimrasil was happy to give the GuildMaster job back to BlackScorpyo.

BlackScorpyo provoked Asterix to duel and smashed him quickly, just to straighten out, who’s the boss and then we agreed all to smash some horde.

We made a raid to Splintertree post, Members were from lvl 40’ish (Paddypower) to 80 and we stormed the place real quick.

According to tradition, we took a picture at the Flight Master… Group picture in this case with Nim’s stupid smiling lizzard on the first place (wonder what makes this lizzard so happy?). Clic on the picture to see it in big.

And a little movie of the same place.

So Asterix’s party was a great succes. Boss went back, guild is back to normal, we drank a lot, smashed horde… well… Everything that makes WoW worth playing.

Again, grats with the big 8, Asterix 🙂