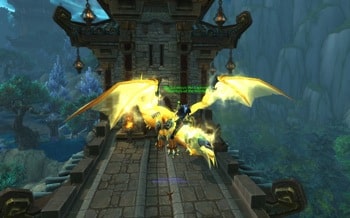 So I decided not to buy the expanson Cataclysm. Instead, I cancelled my account.

Nim took over the guilds, the gold, the stuff and played on for a few months on Cataclysm. She stopped in the first months of 2011.

Scorpyo went to Age of Conan instead. And also there, pretty quick, I got my Armada of level 80’s, we made a guild with Meteron, Lycyn (from <Godless>), Nim an me (called <The Elephant’s Nest>) and it was pretty fun, even though the game was buggy.

But then, AoC got a new (very buggy) expansion, got to Free to Play, so the customers were of a very very different kind and their service never was optimum. The GMs are very impolite and rude. Then after I paid with an outdated card (my visa was recorded into their system, I had a new one but had forgotten the old card was still in), they froze my account and treat me like a criminal. So… Bye bye Age of Conan. I don’t want to have anything to do with Funcom anymore, anywhen, anyhow (Funcom is the firm which owns the games Age of Conan, the Secret World, etc.). Nim, who wasn’t really fond of Age of Conan left at the same time. That was around september 2011.

Then we tried Rift. Lycyn had gone to Rift and most of <Godless> was there. Scorpyo tried in May 2011 (same time as Nim) but only was on for a month or so, then back to Age of Conan. When I left Age of Conan in september, I went back to Rift.

The game was interesting at first and challenging.

But then they made it easier and easier, made it free to play to level 20 (and since there was only 50 levels in Rift, that was almost halfway), people got bored.

When people get bored, they tend to become obnoxious and I don’t want to play with obnoxious people. There are enough of those in real life. So I stopped. Nim stopped a bit later.

We gave Star Wars Teh Old Republic a (expensive!) try, but I don’t think we were there more than a couple of weeks.

Then we went to WoW on a private server (Wrath of the Lich King), Molten-WoW. Well, the game is buggy, since it is on a private server and we had a lot of fun there for a few months. But Molten’s staff are very unprofessional and treat customers like piece of junk. I have never seen anything like this.

Well, officially, it is “free”. But if you don’t pay, you can be in queue to get in for over an hour. Then, players can buy gear, so unless you are totally wrathfull, you will get owned in almost every battleground or situation. So in short, if you want to be able to play when you have time, you have to donate to bypass the queue. And unless you buy some gear, your way to the top is going to be much tougher than in retail-WoW (official WoW), where not everyone is able to be top geared.

When you have a problem and write a ticket, it will get deleted most of the time, or a GM will say: This is a stupid question. If you have some critic and you write it to them, if you write on the forum, one of three things will happen: 1) it will get deleted, 2) you will get insulted and 3) you might get banned for ever for “server disrespect”.

Meteron had gone back to WoW and loved the Pandas. Beside Nim and I read a lot on the net about the new extension, and the critics were very positive. So we gave it a try.

We have been very (possitively) surprised by the players, the gameplay and all. And from what I can see in Stormwind, where I can see many “top geared lvl 80”, many old players who stopped at 80 are back for this extension (I hope the insulting ones will stay away, though).

Even though I had cancelled my account, all of my characters were there. Nine level 80, one level 77 and a bunch of noobs between 10 and 40. Of course, no gold, professions needed to be level (and still do) and all that. The guild was still here. Obviously someone hacked into Nim’s account and emptied it for gold, but this is not catastrophe.

After we played for a while, we decided to stay. Then, after we decided to stay, we had to think about the guild: What about it? Would it stay “as is” just for a couple of us or were we going to start it up again?

We decided to start up again and to recruit.

The official startdate is the 15th of december.

We have characters on 4 realms (see the list of alts on the About Warriors page, here):

You can keep yourself updated through this site, of course and then we have our Facebook pages:

So… These were the news and all that just to say: Watch out, we’re back!