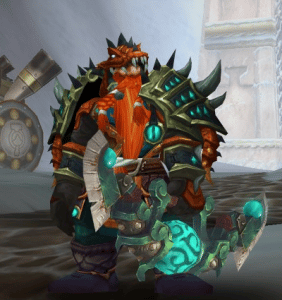 (08/07-2013) – Early yesterday morning, I found an email from my friend, The Dwarf, aka Belothazar. He had written it sometimes during the night, my time, and he asked me why I wasn’t online on such an epic day.

But of course, I went online later that day, and there I got the explanation: It was the dwarf’s birthday!

That’s kind of weird, in fact, because when people try to trade with me, they ALWAYS get a message about me denying to trade, although I’ve done no such thing. That didn’t happen this time. The trade box opened and I saw…

A sight that made my eyes grow HUGE! Wow! It was the vial of the sands! Oh, wow! I’d been dreaming about that mount for MONTHS!

With my hands shaking, I opened up the small vial and got an achievement.

Then I started to search through my mounts to … well, mount. But I couldn’t find it.

“Look under S”, said the dwarf, who must be a mind reader.

And there it was!

We flew around a bit, and then we headed south to Uldum. My char, Nezepher, was level 83, and I hadn’t started questing there, yet. But it’s an area that I love.

After Uldum, I invited the dwarf on a drink in my favorite bar, The Grim Guzler. We listened to hard rock and had strong drinks. I had brought a cake, but when I wanted to share, it was one piece only, and I accidentally ate it myself.

That was a very nice birthday 🙂 For me, at least.