(25/02-2022) – Yesterday, I saw a very bizarre comment on our blog under a post talking about a horde ganker called Stavrii. It was written in almost unintelligible English (even Google translate can do much better) filled with weird abbreviations, no caps, no apostrophes, no punctuation. Just a weird long phrase. Definitely not Stavrii’s style.

I had difficulties making sense of it all. It spoke about IQ, deletion and weird things, so at first, I thought it was someone who arrived the wrong place. Maybe he needed help of a kind. A psychiatrist, maybe? Electroshocks? Weird!

Here is the comment (I moved it and my answers below this article so you can see for yourself):

After quite a while and a couple of exchanges where I found out that this guy doesn’t like Jews, I found out of who he was.

He is a horde ganker used to gank Lakeshire that we have killed several times, last time yesterday. We killed him in Darkshire with our under-geared rogues too, by the way, but I don’t think he knows them and he certainly doesn’t have enough thinking power to remember it.

Haliiax is an unholy Death Knight who bought all his gear. He has no arena rating, never got one (we do), got 4531 kills at this date. Most of these kills were done either in battleground or while ganking AFK’s or in 2 vs. 1 or many vs. 1.

What does he mean by deleting us?

I believe he means “killing us”. And yes, it is right, he managed to kill us a couple of times. Few times, to be truthful, but he managed. And he is so proud of this that he calls this to “delete” us.

What does statistic says?

I’ve killed him with two rogues, one in Lakeshire (that he managed to kill once too) and one in Darkshire (that he never could kill). The statistic of this account somehow isn’t there, so we’ll have to let it go (I do have screenshot, though).

I also killed him with my hybrid Death Knight, several times, but since I moved this character back to Horde, the statistic is gone. 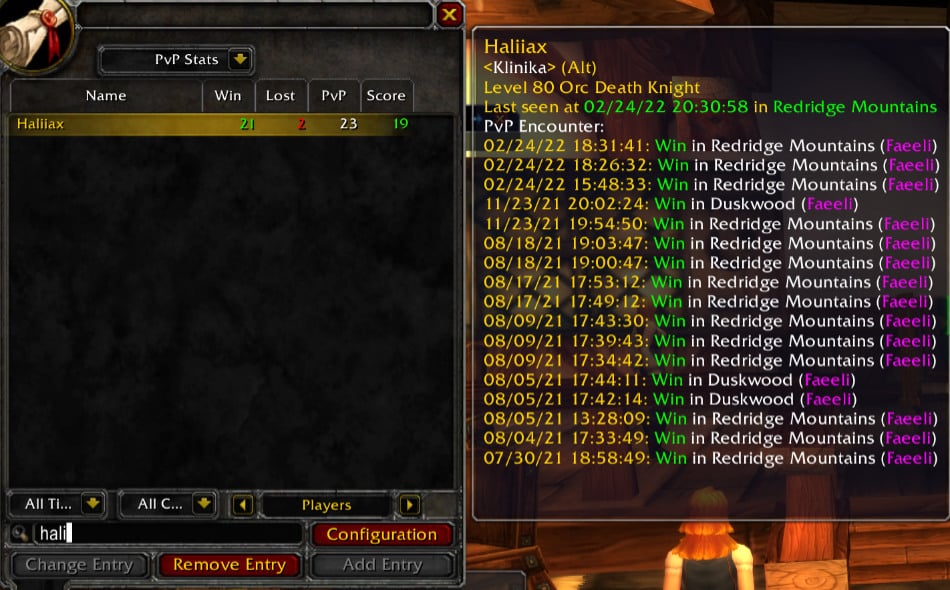 What about Nim? What does her statistic say? 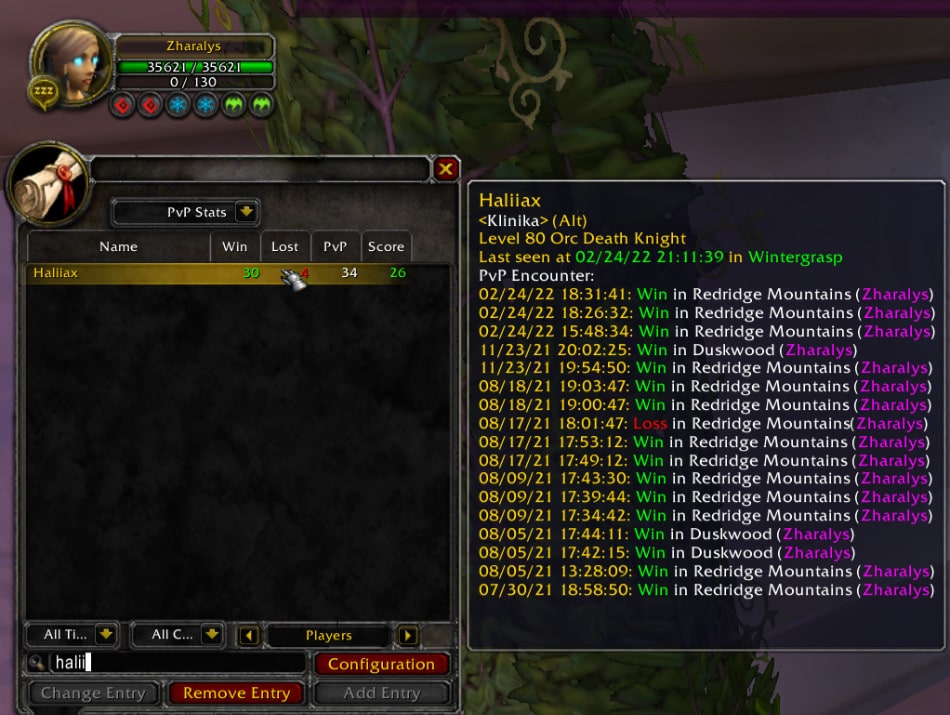 Okay, 30 wins four loss with her Death Knight. One of the loss was the day before yesterday where they were three against her. 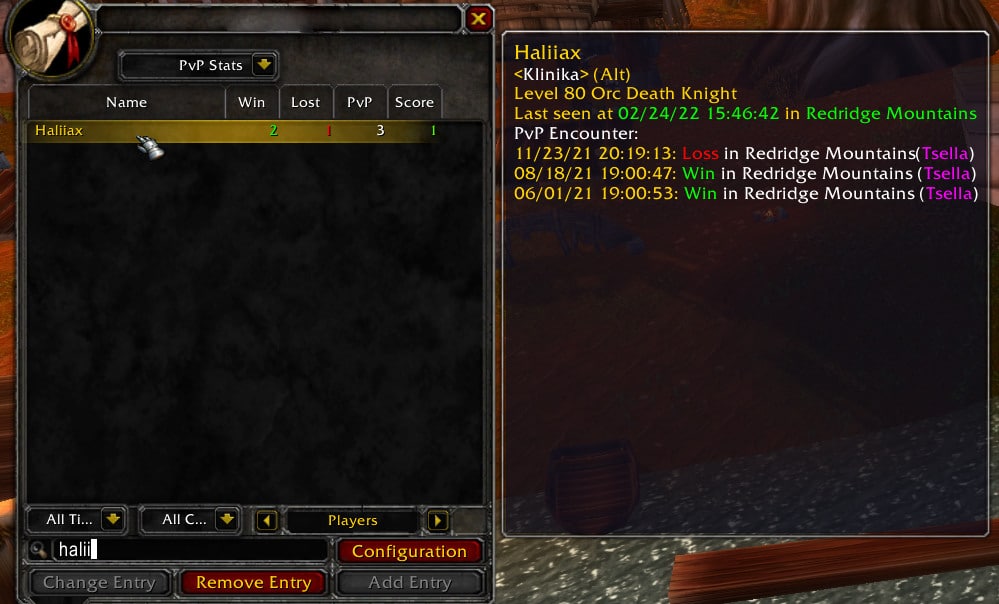 And then two wins for one loss with her rogue.

Not bad for someone who sucks so much. I wonder how it is to lose again and again against suckers?

Now, here is the fundamental difference between normal players and deranged, half (or totally) sociopathic players (you can read the profile of the gankers in this article):

When we go PvP, we are prepared that we can’t always win. I mean, that’s the rule of PvP. If you want to win all the time, stick to dungeons.

And in the case against Haliiax, Nim had just respec’ed to Unholy (she originally had the same spec as mine, hybrid) and she lost a few fights.

Well, we, normal players, when we lose a fight, we look at the combat log and try to understand what happened, what we did wrong, what we should do instead or what we can try to do so we get better.

A ganker will not. For them, since they believe they are superior beings, perfects and PvP gods, it is always some other reason: Either because we 2 vs. 1 (which we are sometimes, cf. the article I spoke about earlier), or, like against Haliiax, if we are 2 vs. 2, it is because their partner is ungeared or maybe they have lag, or… I don’t know.

After we killed Haliiax and his “partner” Aragonxx (it is considered idiotic to blend different lores from different stories, by the way), the story was, that it was just because Aragonidiot was ungeared.

Haliiax forgot totally that we won several 2v2 against him and Dawnoflight, who is very well geared and against him and Elyot (Dawnoflight’s paladin) who also is very well geared. Truth is also, that one of the times, Elyot courageously bubbled and Hearthed and left his “friend” to die. What a nice thing to do. Note the two skeleton in front: Theirs from a fight right before this one. 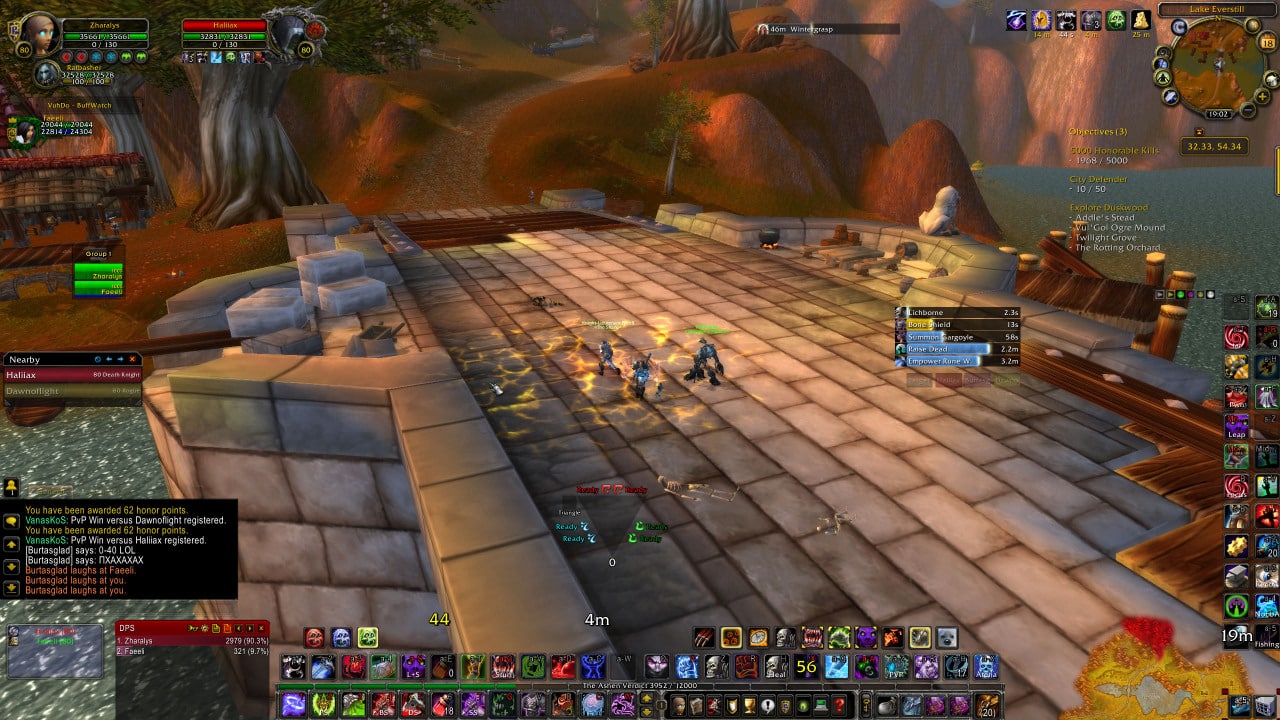 Therefore, his solution is now that he needs at least two friends to dare to gank Lakeshire. Last night, they were up to five people before they dared.

Still, he sees himself as superior.

In short, you can see that here, we have (again) a totally conform profile of the typical ganker. The typical loser who thinks he is great by killing low levels, AFK’s or by being several vs. one and who get out of his small mind when he gets his ass kicked.

You can’t imagine how much it pleases us! Since he is antisemitic, it is even more of a pleasure. (Scorpyo)