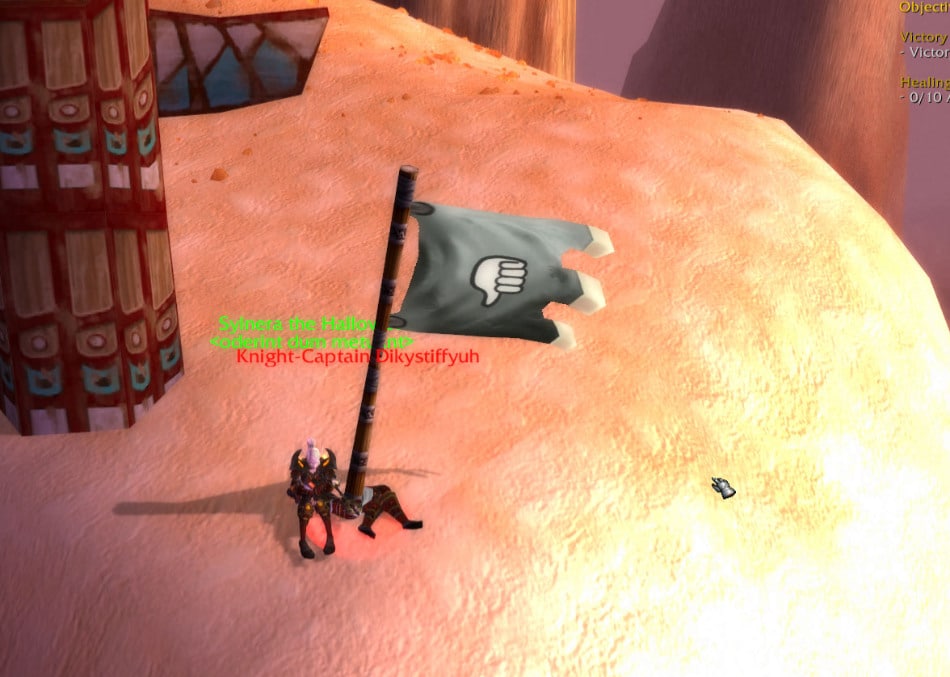 (05/11-2021) – Let me start by saying that, of course, all gankers are pathetic. You have to be pathetic to use your time killing lowbies and not getting any honor for it.

You must be pretty lonely if the height of your day is to kill a flight master who’ll respawn after five minutes or so. Most players don’t mind waiting for the respawn, anyway.

So yes, of course, gankers are all pathetic and most of them suck at PvP. That’s logical because you can’t get much PvP or PvP-training by killing lowbies, flight masters or AFK or low-geared level 80s.

Among all these pathetic losers, the most pathetic I have seen to date is a human rogue called by the moronic name of “Dikystiffyuh” (whatever he’s trying to say) with this name.

His gear is decent PvP gear: Bit of Furious, bit of Relentless, bit of Wrathful, but he hasn’t any gems in anything and he has only enchanted head and shoulders with the Wintergrasp enchant. The rest is totally free of enchanting.

He took a poor choice of professions for PvP that he didn’t even level, so they could be of minimum use to him.

And the only thing Pathediky does, is ganking.

He’s ganking in Freewind Post in Thousand Needles… Rather, tries to gank in Freewind Post (more about that in a second) and when it goes wrong, which it does if I am online, he’s trying other places like Borean Tundra, Dragonblight, etc.

But even if he does that, for example, a day like today: He’s been in Sholazar Bassin, Wintergrasp, Borean Tundra, several hours, and as of now, he still has zero honorable kills.

My guess is that he’s only killing grays, and get no honor and no kill and then get killed himself.

Because from my experience of killing him in Thousand Needles (21 kills out of 22 encounters, the one time where he got a lucky shot, they were two, him and a mage and I avenged myself immediately after anyway), this guy sucks big time.

He can’t do anything. I have never ever seen a rogue played so badly. Not even when I was leveling my first rogue and learned the class did I play it so badly.

And then you can get him several times in the exact same way. He doesn’t learn.

So he used a few well-known ganker-tactics: Run away, run, run – Most gankers palliate their incompetence in PvP by being very competent at running away, Pathediky follows this rule and sometimes, we had to be two, not to kill him (he’s very easy), but to catch him.

So like most gankers, he follows the rules of “taking the goal down”:

Pathediky went through all these phases and comes now more rarely in Freewind Post. For now, he hasn’t tried some of the other cities where I have rogues, so he hasn’t met them yet.

But where he differs from other gankers in the pathetic, is that he never, ever, ever really PvP and he never ever, ever tries to learn it. He is not interested in learning PvP.

Yesterday, in Dalaran, Pathediky asked for a partner for 2v2.

Ooooh! Nice! Maybe he wants to learn instead of bothering others, I thought… But no, no!

Pathediky asked for someone to carry him through 2v2. So he’s really sure he does nothing, learns nothing and doesn’t pvp and yet gets honor points and gear. He does call it a “partner”, though!

Mate! A “partner” is someone with whom you actually work or fight, side by side. It implies you do something too! 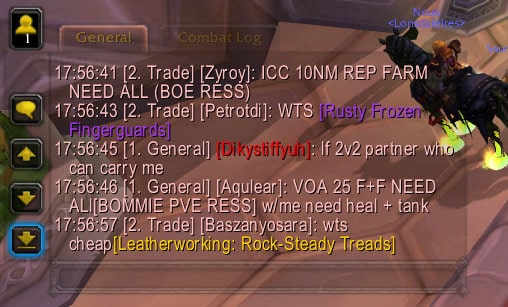 This is what gives Pathediky the price for the most pathetic ganker of Warmane-Icecrown for the year of 2021!