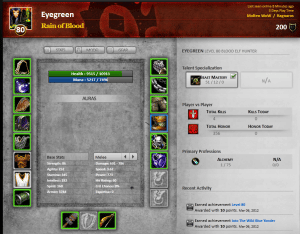 Azazelle, lvl 57, one of Scorps alts, asked me, Celesti, lvl 80 badly equipped Death Knight, to boost her through Stratholme. So I waited for her in Eastern Plagueland. She didn’t have the flight path yet, so she had to come all the way from Ironforge.

While I waited, and just before Azazelle arrived, I noticed a blood elf hunter, lvl 68, by the name Eyegreen. He was targetting different NPC’s, and he hadn’t seen me, yet.

After I’ve followed his wandering around for a couple of minutes, he finally saw me. I just kept looking at him without doing anything. So he switched his focus to something else. 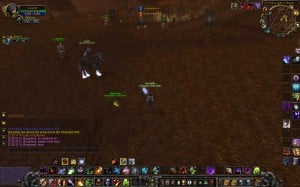 To be honest, I didn’t think he would have the nerve to attack her, with me standing near him, and with us clearly belonging to the same guild.

I don’t know what the guy thought about, but he sent his pet to attack Azazelle, and I grabbed him and killed him with one blow.

Afterwards, Azazelle spitted on his dead body and whispered him and told him just how noobish he was.

I kept babbling about how I didn’t expect him to attack. How can anyone be so stupid? I don’t remember his hair, this green eyed blood elf, but it must have been blonde.

I just checked him on the Armory. He’s reached lvl 80, and he has 4 PvP kills in his record. So besides ganking lowlevel players, he’s managed to at least participate in 4 kills of persons who were his level or just below him.