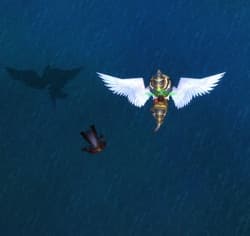 Let me tell it straight away: On Ragnaros, Horde is worse than any other places I have been (both as Alliance and as Horde), and I am really happy my Hordes aren’t on this realm.

While I was leveling and before I got geared, I got very often ganked this way… So does it go with Meteron and Nim.

But I do actually keep a list of these people (it’s automatic, I just have to add a note), unless I can come back and avenge myself right after, of course, like it was the case with Eladius.

Giving you another example:  A Horde lvl 60’ish was i Honor Hold. He didn’t have anything to do here, so I ganked him (at the time, Silah was 80 but not geared yet, her gear was 72 – 78 at best). Then the guy whispered me…

It was something like: “If you gank me again, I’ll come with my mage and camp you”.

He kept on menacing and I only answered “Ooooh, I’m shivering”.

Then he came with his mage… “Deathleg“.

He came into the inn (first mistake, a mage needs space) and he used split image and smashed most npc’s in there: second mistake, I was hidden in a corner, not touched by the Area of Effect and he was burning mana and putting important abilities on cooldown.

Then it was a piece of cake to shadowstep him, ambush (I generally don’t use ambush if people are too well geared, especially not back then when I wasn’t geared because I don’t want to use too much energy on a first hit) and then he tried to run away… Out of the inn – blink – trying to regain mana (yes, “blink” uses mana too!).

I was on him in a matter of a splitsecond (rogue’s sprint), and killed him at my next blow. Then I stood there and whispered to him: So, noob? Who is camping who now?

I think Horde here are so used to Alliance not daring PvP (or being bad at it), that they take a lot of chances… That they shouldn’t really take… Not when I am around. Beside you don’t get good PvP training by ganking or by being 2 or 3 on one.

Which brings me back to Olfso: After a friend of his, Growler, killed Nim and/or Met, I don’t remember exactly, I came with Silah (she was still undergeared at that time) and killed him a couple of time. Then I whispered him that he should lay off and let guildies alone.

But then he came back with Olfso. I almost got Olfso but Growler got me from behind.

And payback time has come. 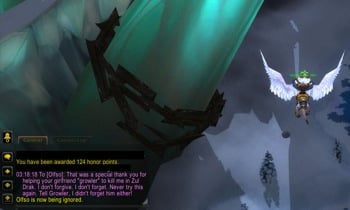 Regularly, I check my list, see who is online and, if it is possible (if they are not in dungeon or Dalaran or things like that), I find them. I find them, I stealth, I get behind them and I kill them.

A couple of days ago, Trieste (Nim) and me were out seecking revenge from Olfso (I kill twice for one kill – I kill once for a failed attempt to kill me). We got him easy (he was in Storm Peaks), but then he HS’ed.

So I found him yesterday, he died in 2 hits.

And I whispered: That was a special thank you for helping your girlfriend, “Growler”, to kill me in Zul Drak. I don’t forgive. I don’t forget. Never try this again. Tell Growler, I didn’t forget him either! Never bother anyone from our guild again, you wouldn’t like what happens next!

And then, I began roaming… But this will be the subject for another post!