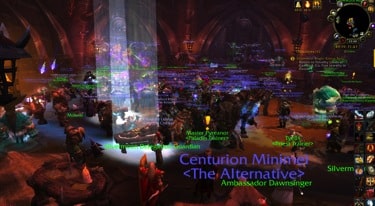 The beautiful Banchee queen had to be offered… Slimy Stinking Garrosh would live… Or at least; we would do our best.

So we gathered, and gathered, called on to people and got one raid group… then two. We ended up being around 75 grouped together in Orgrimmar.

We all (almost all) gathered into Grommash Hold (Garrosh’s “house”). We buffed, we made banquets, we ate, we spitted at Garrosh and told him, that we weren’t defending HIM, but defending the Horde.

The zeppelin kept arriving, spitting up more and more Alliance who were gathering outside of the city.

What on earth were they doing? Why didn’t they come?

They were buffing, eating, preparing, waiting for everyone to be here. This was certainly a well-prepared raid.

I was becoming nervous.

People were yelling stupidities, and the chat box was filled with red lines that weren’t worth reading (a few came into my ignore list, so I could see what was happening).

Then a yellow line: 3. [LocalDefense] The Valley of Spirits is under attack!

They were on their way!

I buffed again, even though it wasn’t needed at all. I had to do something.

And then the whole raid group kind of moved into the very small entrance to get into Grammosh Hold. The entrance is kind of weird; you get through the gate, and you find yourself in front of a pillar with a kind of circular way around it, so you have to go around the pillar and through another gate to get into the central room. 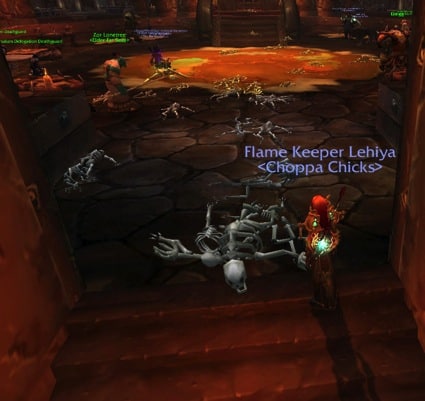 Needless to say that the whole raid couldn’t fit there. Most of us stood there, or right at the second gate and we were smashing the few that made it that far.

The fight went on and on.

Very few Alliance made their way into the central room.

I am still wondering what his plan was?

I mean, we were about 40 or more in there, plus Garrosh, plus the guards and he was alone?

Well, when the bubble puffed up, he was very surprised, I guess. A very intense and very short surprise.

We were few who got the achievement “City Defender” that day (Lehiya and Runathel included).

And then it became quiet.

Of course, a few heroes chose to rez in the middle of our party. Hoping to be able to mount before they got killed.

Most of them couldn’t.

Garrosh was fine, they had gone.

Then came the battle-cry: Let’s storm Stormwind and kill their king, to teach them not to mess with the Horde!

Mages made portals to Stonard and we flew to Elwynn Forest.

We agreed to gather, at first, on the island in Stonecairnlake.

For some reason, Runathel and some other couldn’t take the portals, so we summoned them all with a warlock’s portal.

Very quickly we flew to Stormwind, on top of the roof of the castle. 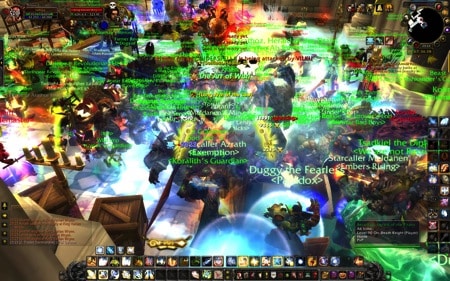 And when we all were there, we stormed it.

Alliance tried to stop us, but it didn’t go too well. I guess they weren’t expecting us at all, or if they did, they didn’t expect us to be here so soon after their wipe. I mean, at around 23:00 they were wiping in Orgrimmar, and at 23:15, we were in Stormwind knocking on their king. Maybe some of them still had resurrection sickness!

Well, the king died, of course, and many Alliance died too, even though they bravely tried to defend their King. I have to say, it was impressive because they weren’t many, they weren’t organized. They obviously didn’t expect us (not that quickly) and still they could pull a great fight. I could see, from my PvP statistic on an add on I have, that I killed some of the same people in Orgrimmar and in Stormwind.

Then the plan was to take bank and AH, but I wasn’t really interested, so I staid in the castle.

That wasn’t my brightest idea because after a while… I was kind of alone there, so of course, I got killed. It was the only time I got killed that day. I rezzed by the angel, said nicely “thank you for a nice raid” and i went back home.

I could see, that after a while, they were trying to mount a raid to do [For The Horde] but I wasn’t interested. Firstly because Lehiya has it, she got it a long time ago and my baby-rogue, Sheket, (very new level 90) was too badly geared to do it.

My guess is: They either couldn’t get a raid group (they were trying for a couple of hours, so they might be on many’s ignore list) or they wiped.

So Runathel and Lehiya stopped while still in the wind of victory, and that was great!