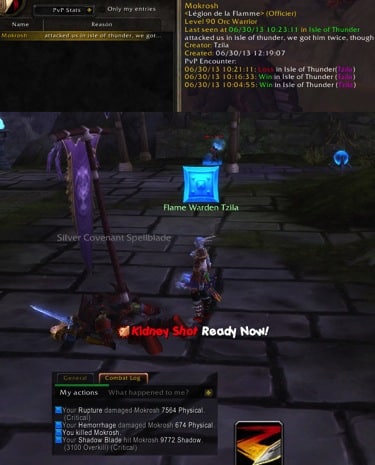 Each time we just tried to pass them by and let them mind their own business; we have regretted it. A few full Tyranical-players have fallen under our hits, even though, at that time, we weren’t even geared full malevolent. As I told you: They are very, very aggressive, but not very good, in fact. Not even when they are well-geared (maybe they got boosted in arena or something… I don’t know, I still can’t understand how such bad players can get that kind of gear.)

Therefore, on Culte de la Rive Noire, we now attack Horde on sight. No reason to play fair with them. I am happy my hordes aren’t on this server.

The newer in time was Mokrosh… Oh! Sorry! Kevin Mokrosh! We were just about to leave our place when we saw him, and he saw us… rather: he saw Laylael (resto-druid) who wasn’t stealthed. He didn’t saw Tzila subtlety rogue), who was. He focused her, was about to charge… but got kind of stopped before he had time.

After a short and violent fight, he died. Unhappily, Laylael is not on the picture, she was further back on the right side and I had open my bags, so you can’t see her on the picture… But in fact, here she is!

Then we went on with our quest. Camping is for Kevins and for noobs who have difficulties having a kill, not for real players.
While we were fighting mobs on Horde’s place. Guess who charged us from the shadow?

Yes! You are right! Kevin Mokrosh!

Well, even though he was on his territory and had his “mobs” to help hitting us, even though he had an item level of 510 (we barely are up over 477 ourselves), and even though we were in the middle of a fight, we killed him a second time.

But then, we had still a lot of mobs, attracted by Kevin, on our neck and we had to finish them off if we wanted some of our abilities to be on cool-down, we didn’t even had have time to heal. And then he came back, and of course, got us… At last.

Well, actually, mobs got Laylael (we could see it from the log and from the repair bill), so he only got one of us, Tzila, who was at about half life when he charged us back. And since he is such a poor player, well, he was camping us to be sure we wouldn’t get up and get to full health or anything like that, because, even on his territory, we would have kicked him again.

Oh well, we had to do the quests with four of our hordes on Defias Brotherhood anyway, so I switched to an alliance character made for the occasion and I told him he shouldn’t wait because we were going on another server.

We came back about an hour later and finished our quests… And I think that we will make an exception about camping for the future.