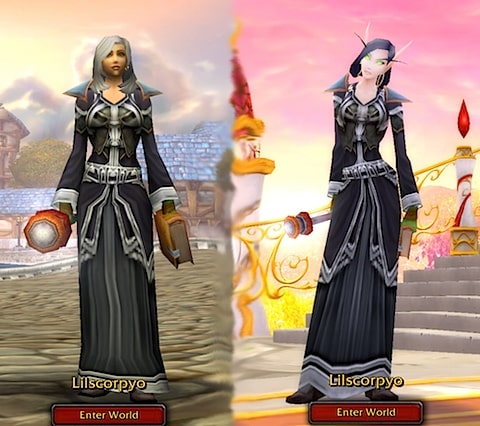 One of my mount is the Big Blizzard Bear, which is said to be “account bound”.

This is not quite correct because your new character don’t just get the mount. You have to send it from character to character.

The speed of the mount is adaptive to your skills (but it can’t fly!).

So to send the mount to my horde characters on Turalyon, I had first to initiate a server change (20 euros) and after that, I had to change faction (25 euros).

I could, of course, have done it the other way around.

And there is no copy of that bear so if I make a new character on Blade’s Edge and I want her to have the mount too, I’ll have to make the same thing the other way.

So I’ll think twice before I do it.

Anyway. Now it’s done. Lilscorpyo became a Blood Elf priest. Things in bank, bags and all have been moved.

Reputation has been replaced (Stormwind became Orgrimmar, etc.) and Hearthstone has been moved to the standard inn for Blood Elves: Silvermoon.

Which means I’ll have to take the trip to Dalaran once more because Dalaran was my home.

And home is where your hearthstone is.