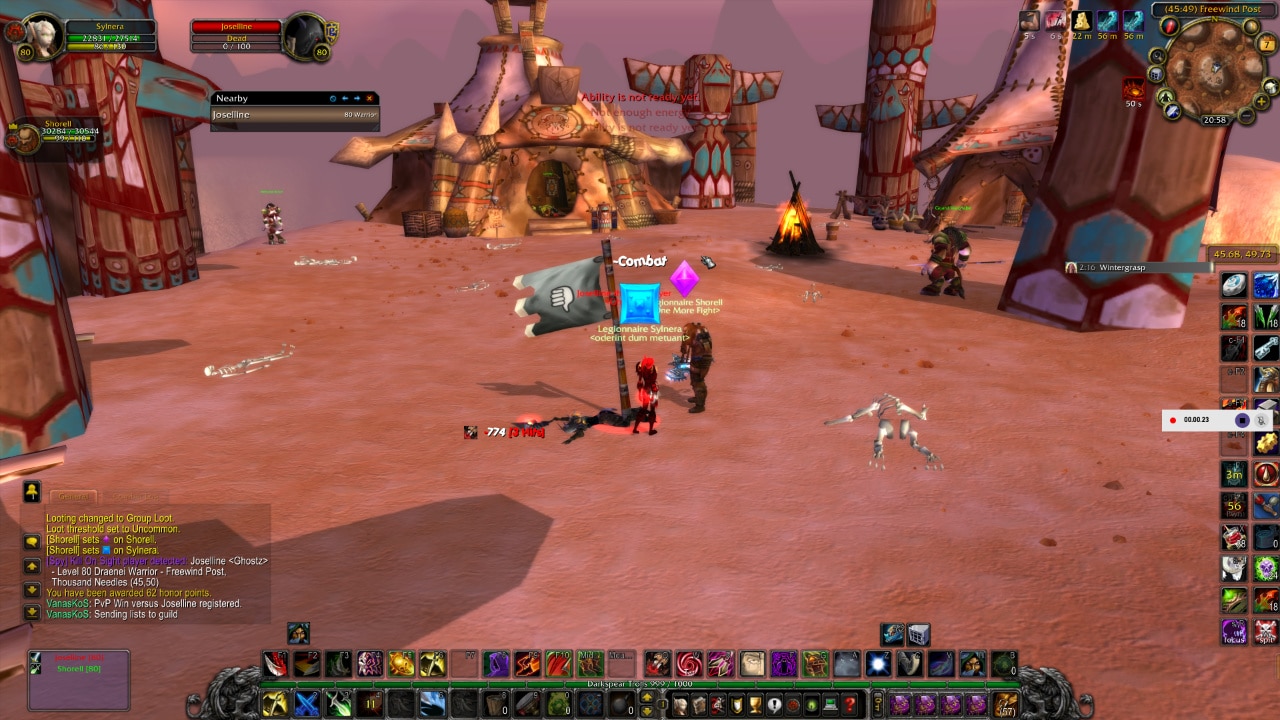 (07/05-2021) – I don’t remember how we met Stavrii the first time. I usually have characters in different cities where there is ganking (on Horde and on Alliance side, we hate gankers whatever faction they’re in), and I regularly log on to them to see how things are going.

I believe it was under such a check I saw a 35k or 37k warrior, equipped Shadowmourne, killing level 20’s and 30’s and NPCs in Lakeshire.

I said to Nim: There is a noob-ganker here, the guy needs Shadowmourne and 35K to kill level 20’s.

So we went on him with Nim’s Death Knight, Zharalys, and my warrior, Scorpyo.

It was pretty easy to kill him: The only buttons he knows are Bloodrage, Bladestorm and Enraged Regeneration. Most of the time, I just bladestormed too, since I have more resilience than him, the game generally was to my advantage. I killed him sometimes alone and most of the time together with Zharalys. 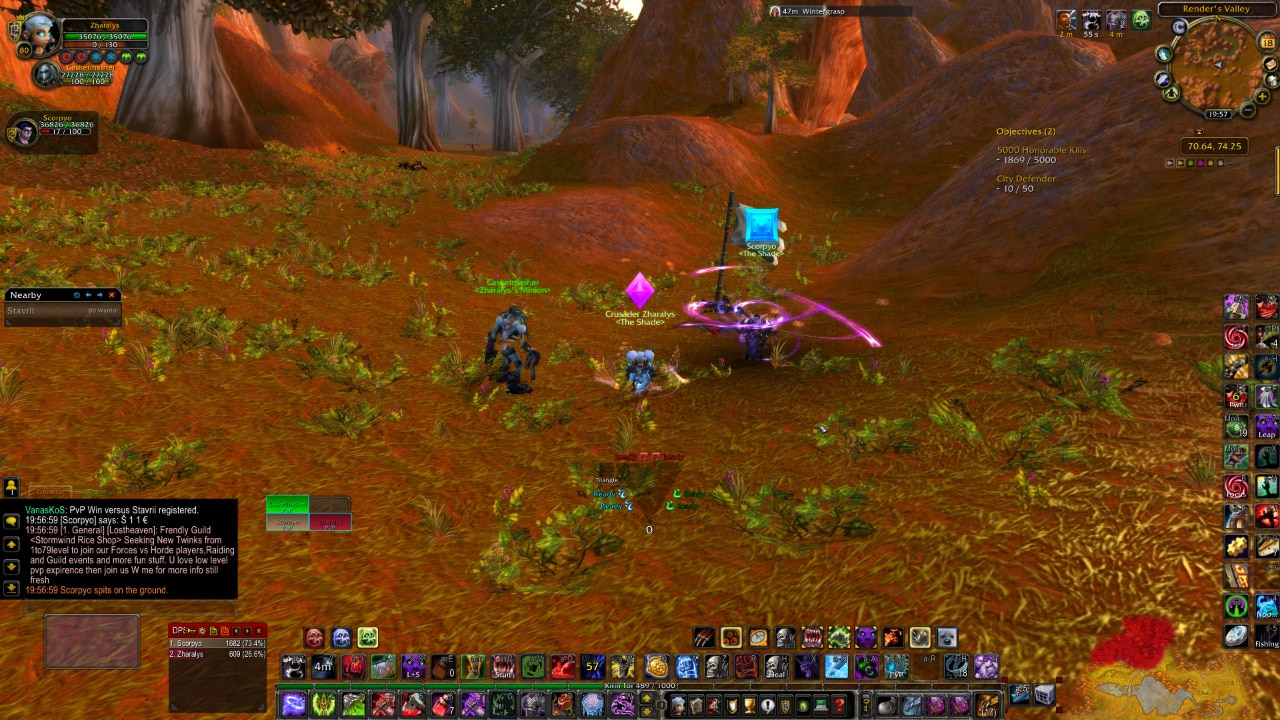 Hey! Two against one? WTF?

Yes. Why two against one?

First because, “why take any chances” and second, and especially: “We don’t play fair against suckers”. It is no more unfair to be two level 80s against one level 80 than it is to kill low levels and block entire city and NPC-hubs, thereby spoiling the game for other players.

You spoil their game, we spoil your fun!

So I put Stavrii on my ganker-list and my spy warned me each time he came online and was in Darkshire or in Lakeshire. If it was the case, we came at once and killed him… And planted our flag up his ass.

According to statistics, we had 58 encounters, we killed him 53 times (and he got me 5 times). Some of his wins were after he died, if I didn’t heal quickly enough, then I died of bleeding, so I don’t know if he got honor for all of them, though. 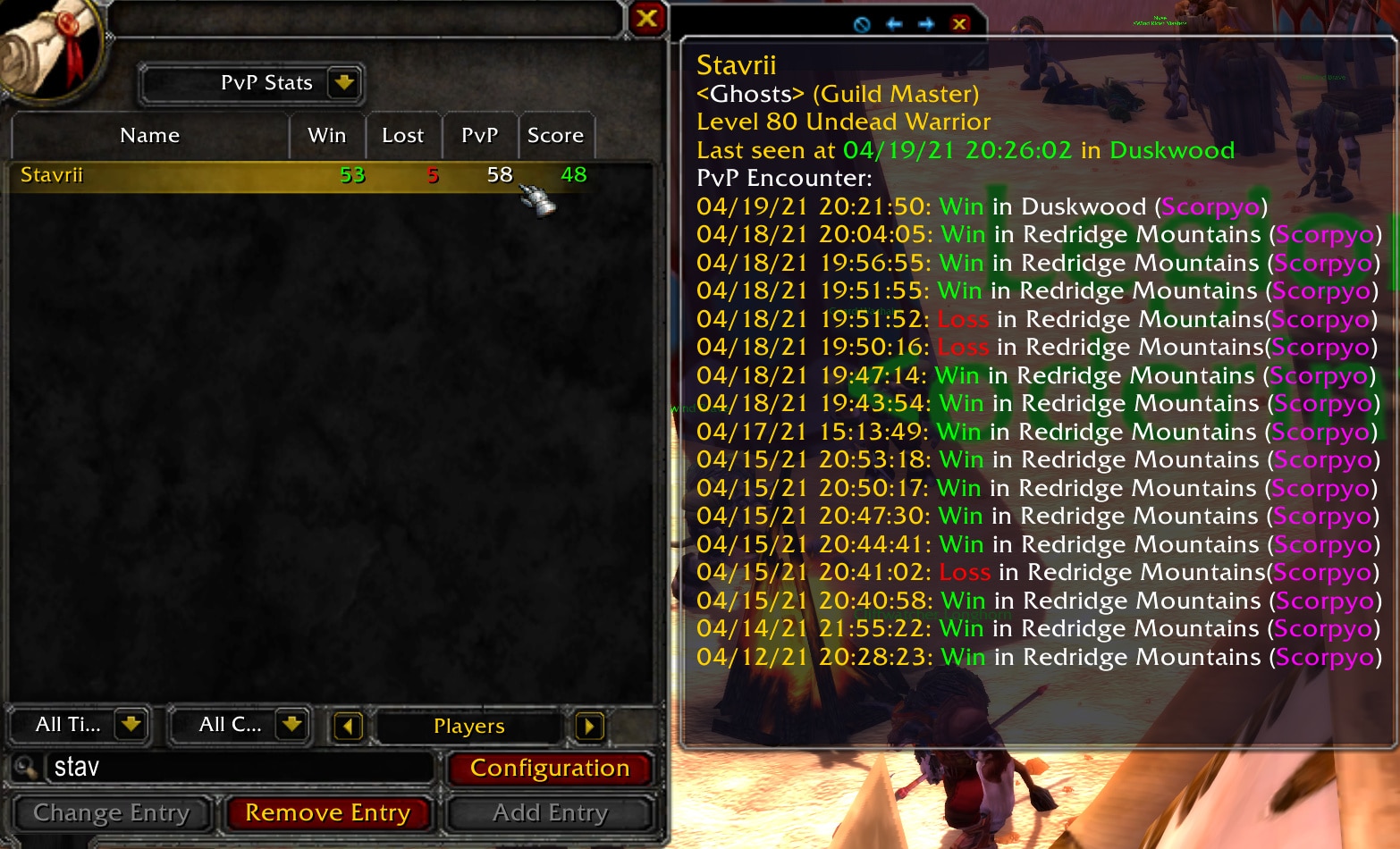 And then… All of a sudden, one day, when I logged on my spy, I got the message “Stavrii has disappeared from your friend list”.

What? I checked armory, and correct enough, he had disappeared.

“Did he delete his char? Zharalys asked.”

“Nah, I don’t think so. Not a guy with Shadowmourne. He is very stupid, but not THAT stupid. I guess he was tired of getting killed by us and he switched faction and name by the same occasion.”

Just like any stupid ganker, he doesn’t have any loyalty. He’ll gank. He doesn’t care what faction it is.

Since we have horde, I thought we will meet him soon again, most probably in Crossroads since it is one of the favorite ganking places.

A couple of days later (or the day after, even), I made a check on Crossroads to see how it was going, and there he was!

He had changed faction, race and sex: He was now running a female Draenei warrior: Joselline.

I had my hunter there (Gwenaelle) and one of my rogues, Mazal.

Nim too had her hunter there, Keshet, she came online and then we went on him. We killed him about 28 times there.

And, he was so lucky to get us once. Now, I am not very good at ranged combat, I prefer melee and I’m not good at kiting. He was so happy to have been able to kill us (we just had been in a fight against two priests that showed up so we were low on health too) than he kept “sitting” on us (even though we were very much alive). 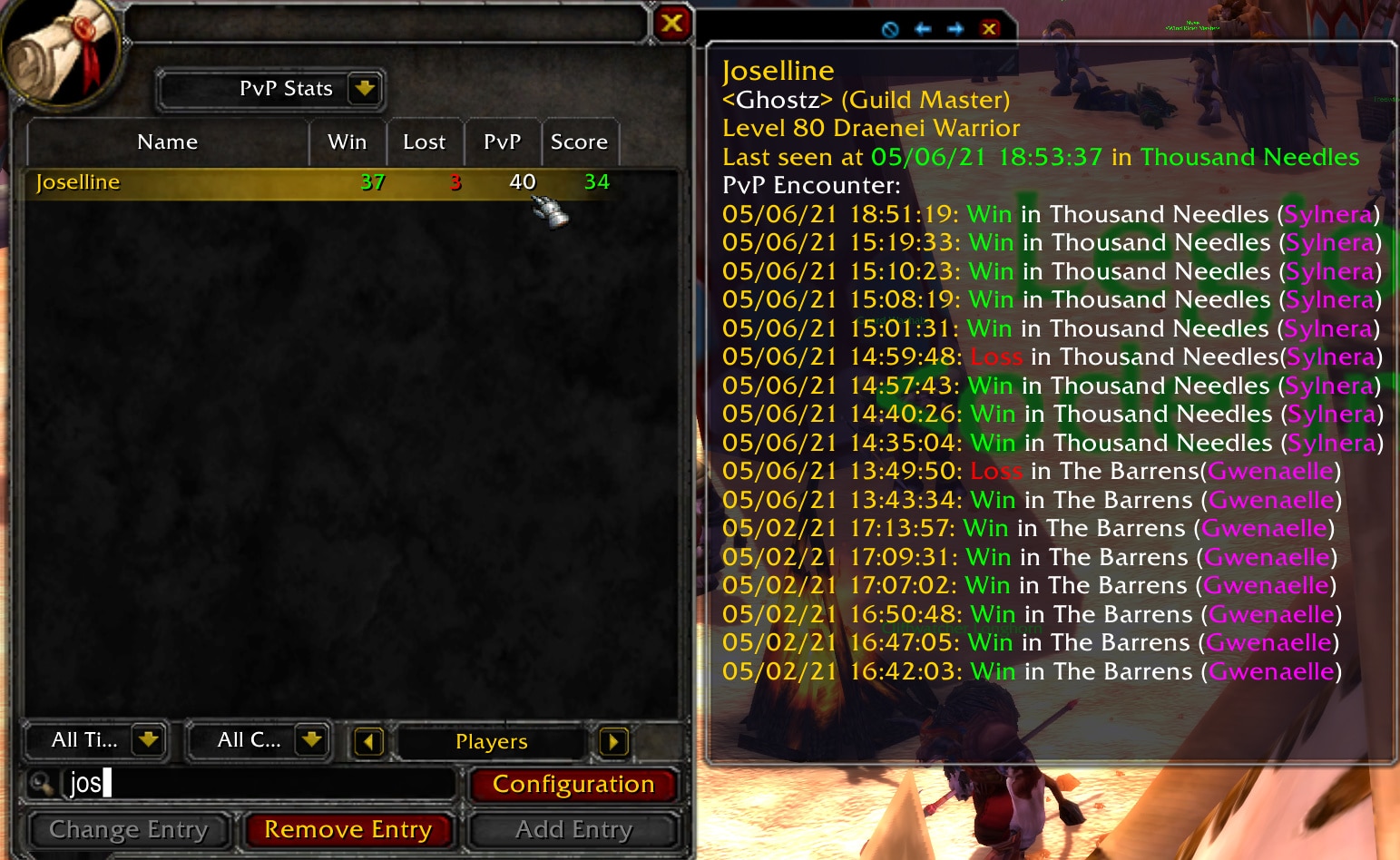 So I decided to go for my rogue, Mazal, that I play better than hunter. I was stealth so no one knew I was there (and in Crossroads, Horde doesn’t have PvP flag on, so we have an advantage of first strike). The statistic of Gwenaelle (hunter) losing is off: the add-on counts “Feign Death” as getting killed. He only got me once, not twice (hence his happiness when it happened!).

But they were three: Shadow priest, Disc priest and warrior.

They were taunting Keshet, calling her chicken because she didn’t attack the three of them. We just waited until at least one more horde came. Three against three would be better.

And it happened: another hunter.

The fight was short and intense and the three gankers got killed in just a few seconds and ended up with our flag up theirs. 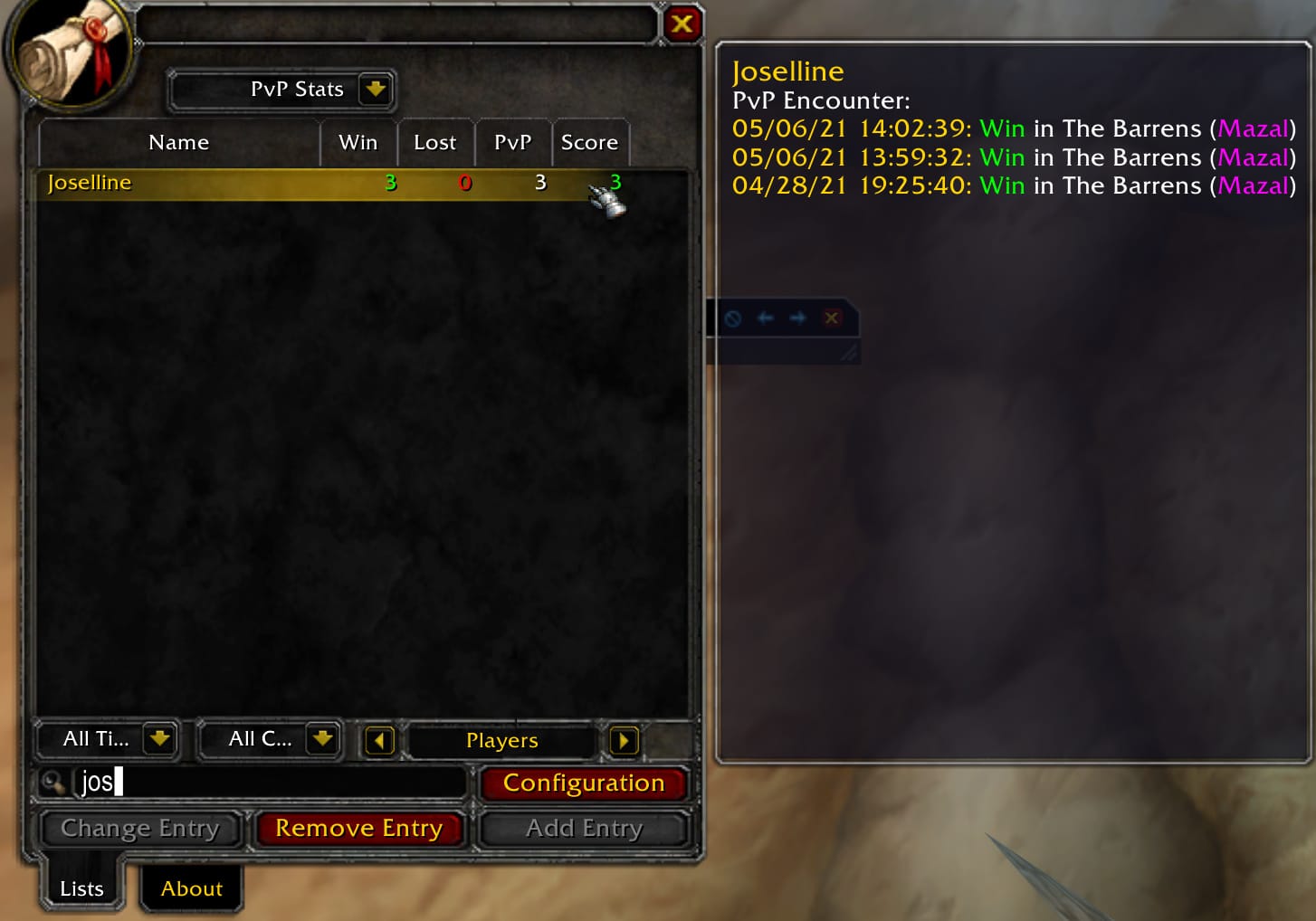 We killed the priests several times again, they ended up leaving, and Joselline too.

He went to… Thousand Needles.

But there, we have two rogues guarding.

First time, since Nim was out with the dog, I had to take him alone, which was done swiftly, and then, after a while, Nim came and we were again two. Chainkilling him.

After the fight you could see here, the idiot rezzed under the bridge and then jumped down… to his death! Total imbecile.

I talked a bit to him and he sees himself as the big winner of all the battles. I didn’t quite understand his logic, but according to him, he believes he is much better than us because he can kill the Flight-Master or some lowbies before we kill him and he even managed to run away from us… That’s his idea of victory, it seems.

The elevator obviously doesn’t stop at the top floor.

We need a few more kills to get to the same number of kills that we had with Stavrii and then it’ll be interesting to see if he switches back or maybe finds of a better way to have fun than spoiling it for others. Or eventually play some other game?

Anyway, we get honor each time we kill him, he doesn’t when he kills low levels or Flight Master. His name shouldn’t be Stavrii or Joselline, but “Diesalot”, because he doesn’t know to do anything else.

See you around (Scorpyo – Mazal)