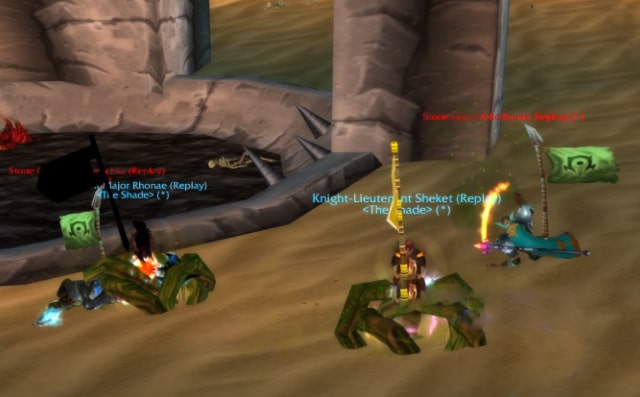 (09/05-2021) – We were a bit in arena back at the end of Wrath of the Lich King-expansion. Nimrasil used her resto-druid (Laylael – Nightelf) and I was with my subtlety rogue, Silah (Nightelf as well – I like Nightelf for rogue because you have one free Vanish). Back then, we had fun, and that we started arena again. For now, it is just to gear up to Relentless. We don’t intend to get high rating and Wrathful and all. Just to gear up between battlegrounds.

So most of our chars buy weapons for coins and then fight for gear. We start with level 78 – home-made gear and between Wintergrasp, arenas and battleground we end up full Relentless (even with a couple of wrathful in between: cloak or ring or such).

At first, it was a catastrophe. Everyone we met looked like they were 35k or 37k warriors, paladin, death-knights or 30k priest and warlocks. We went from defeat to defeat and almost never had time to hit them as much as once.

After the first week, ten seven seconds loss later, we were really down. We love world-pvp and we managed pretty well, but arena is different.

Then went another week and another. With better gear and more sustenance, we had a couple of wins.

Every time, when it starts, if we see they are better geared or that it is a set-up we can’t win over, I say: “Okay, this one is a loss”… But it doesn’t mean that we give them an easy win. We fight, and sometimes, we go: “Hey, we killed one of them!” or “Hey! They were both very low in HP”.

And then we discuss what we could have done and what we will do next time we meet them or same set up. And it has happened than if we met them again, then we won.

After a couple of months in arenas, we can now see the changes in arena, of course, where we manage much better and lose much less, but also in world pvp: We coordinate better and we talk more.

That was one of my big problems: I never said what I was doing. After arena, where we communicate more, we do the same thing in world pvp and we can really feel the amelioration.

I will post some of our fights on the blog, more for us to see later on and to remember.