(21/05-2022) – I will start this new series about the gankers we made stop ganking with our most famous ganker. Paviaani was the name of his main ganker. But we called him “The Itch Mite”.

First, a brief explanation: Sarcoptes scabiei or the itch mite is a parasitic mite (an arthropod) that burrows into skin and causes scabies. The mite is found in all parts of the world. Humans are not the only mammals that can become infected. Other mammals, such as wild and domesticated dogs and cats (in which it is one cause of mange) as well as ungulates, wild boars, bovids, wombats, koalas, and great apes are affected. (Wikipedia)

Even though we call him “Fnatmiden” (“The Itch Mite” in Danish) when we speak about it, I will here call him by the name of his main: Paviaani.

We not only made him quit ganking, like we did with some others, who will be the subjects of other articles, but we also made him quit the game on Warmane.

First of all, his characters. He had several characters. On alliance side, he had: Himputti (hunter), Luuseri (druid), Ninjamies (priest), Paviaani (mage), Saakeli (shaman), Samperi (rogue), sampa (warlock) and Tapani (death knight).

On the horde side he had a rogue, Hiivatti.

Everything started when Ashlaya was leveling Niphel. She got ganked by an 80 mage, Paviaani, in Freewind Post (Thousand Needles). Shortly after, I was leveling I don’t remember who and got ganked by the same mage (she had put him on VanasKos) at the same place.

So I went there with Mazal to take care of him.

But then he ran away (jumped off the cliff with slow fall on).

He whispered to me with a freshly made horde Death Knight to laugh at me (you can’t whisper before lvl 10 on Warmane-Icecrown) and to tell me I was too dumb to kill him, and he was too smart for me.

So I put him on my friend list on my alliance spy and every time he showed up in Thousand Needles, I went after him. But he always could run away.

Then, with some of his alt, he began to gank Niphel. It was several hours, they were 5 or 6 well geared alliance ganking Niphel and a couple of low levels.

He regularly switched to his newly made Death Knight to taunt Niphel (who had become lvl 44) to explain how good he was to kill low level and how smart he was. A real feat of strength (please note the chatbox). 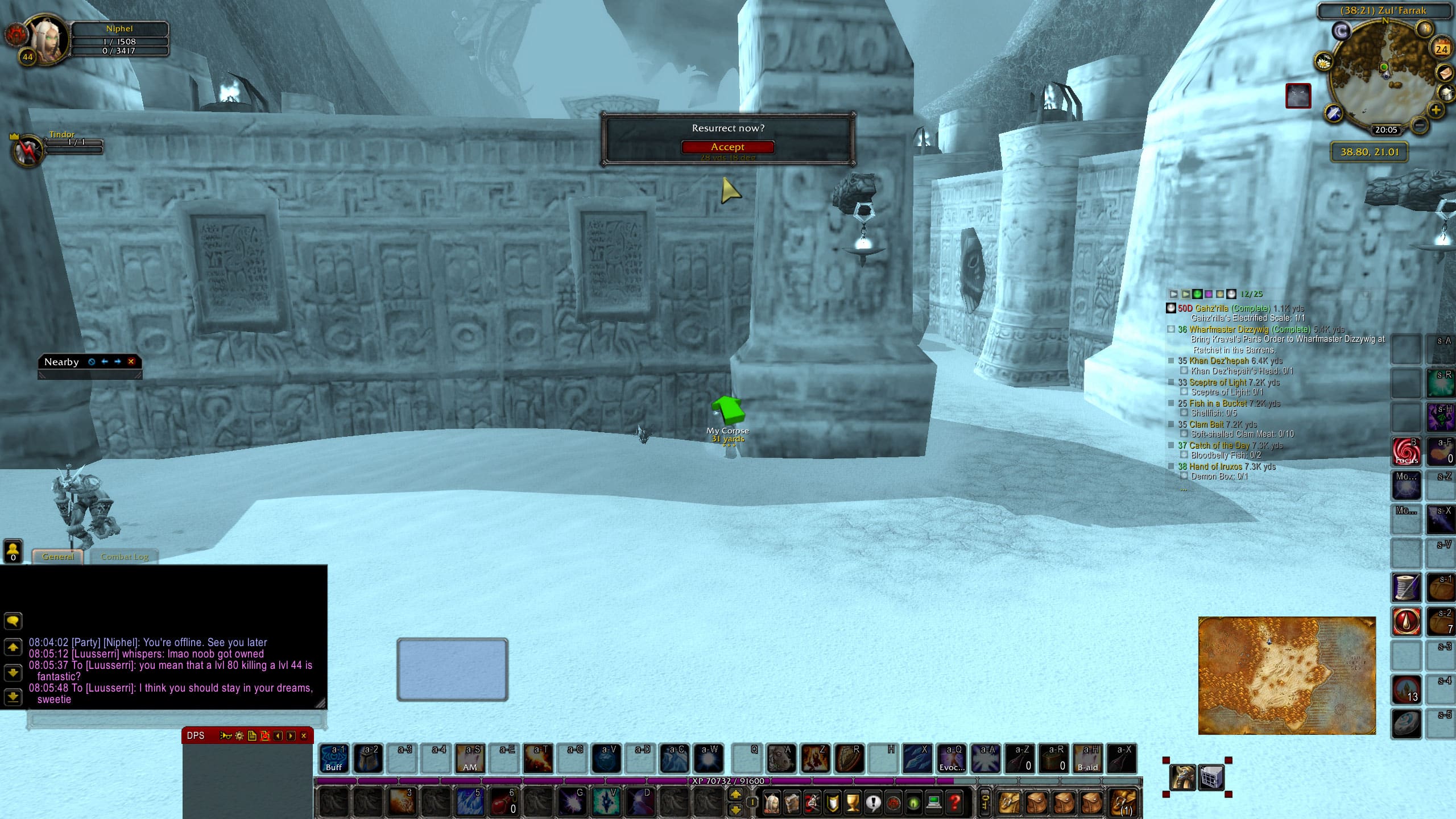 This way, we got to know a few of his alts.

He still tried to gank Freewind Post, but since we were there at once, he finally stopped.

He went on to gank in Tanaris instead: He was at the entrance of Zul Farrak dungeon, ganked, and ran into the dungeon if things got hot.

We found out that Paviaani meant “Baboon” in Finnish, Luuseri meant “Loser” in Finnish, so we guessed he was Finnish (aren’t we geniuses?), we then scanned regularly for high levels in the area and a name that could sound Finnish. We checked them on the net and found more of his alts:

Then, every time he showed up, wherever with any of his alts, one of us showed up there. I’ve killed his Death Knight a couple of time (Tapani) and then his rogue (Samperi).

Therefore, the only place he could gank was near Zul’Farrak because it was difficult to catch him there since he just could jump back into the dungeon.

We thought he might have a new spy to know when we were online or not, so Ash made a new Death Knight and waited. There came a new horde, Death Knight, with a funny name: Luolamies (“Cave Man” in Finnish).

The Beginning of the End

I added him as a friend on the horde side, and we let like we didn’t notice. It was an excellent information: Each time Luolamies came on line, that meant that he was going to gank somewhere with someone. And he was monitoring us.

So if we couldn’t see any of his alts, we scanned for Finnish names and this way, we ended up finding all his alts.

I added them all as a friend to my alliance spy. Each time one of these guys showed up anywhere, we showed up.

We had my paladin and Ash’s hunter in Tarren Mill, one of my rogue and Ashlaya in Thousand Needles, Mazal and Zharalys (Nim’s Death Knight) in Tanaris near Zul Farrak.

Since he found out we had alts, he scanned for the guild. We had them in “One More Fight” at the time and found our alts.

Okay, we weren’t hiding either. We wanted him to stop ganking these horde places, and it worked. We didn’t care whether we killed him or whether he just turned back and whispered to us after. The idea was to stop his ganking.

When I started my multi-box, he whispered to me also (with Hiivatti, that’s how we got to know him). So I put him on ignore.

Then, one day, when he was ganking with his mage (definitely the character he preferred), we got him: I attacked with Mazal, he ice-blocked (he always used this technique: Ice block and out of ice-block + blink back into the dungeon). So we were ready.

He ice-blocked, then out of ice block and before he had time to blink, Zharalys death gripped him and we killed him and put a flag up his ass.

He managed to rez and to get into the dungeon and believe me or not, but he never ever played this character ever again since that day. Maybe he went into depression or something. 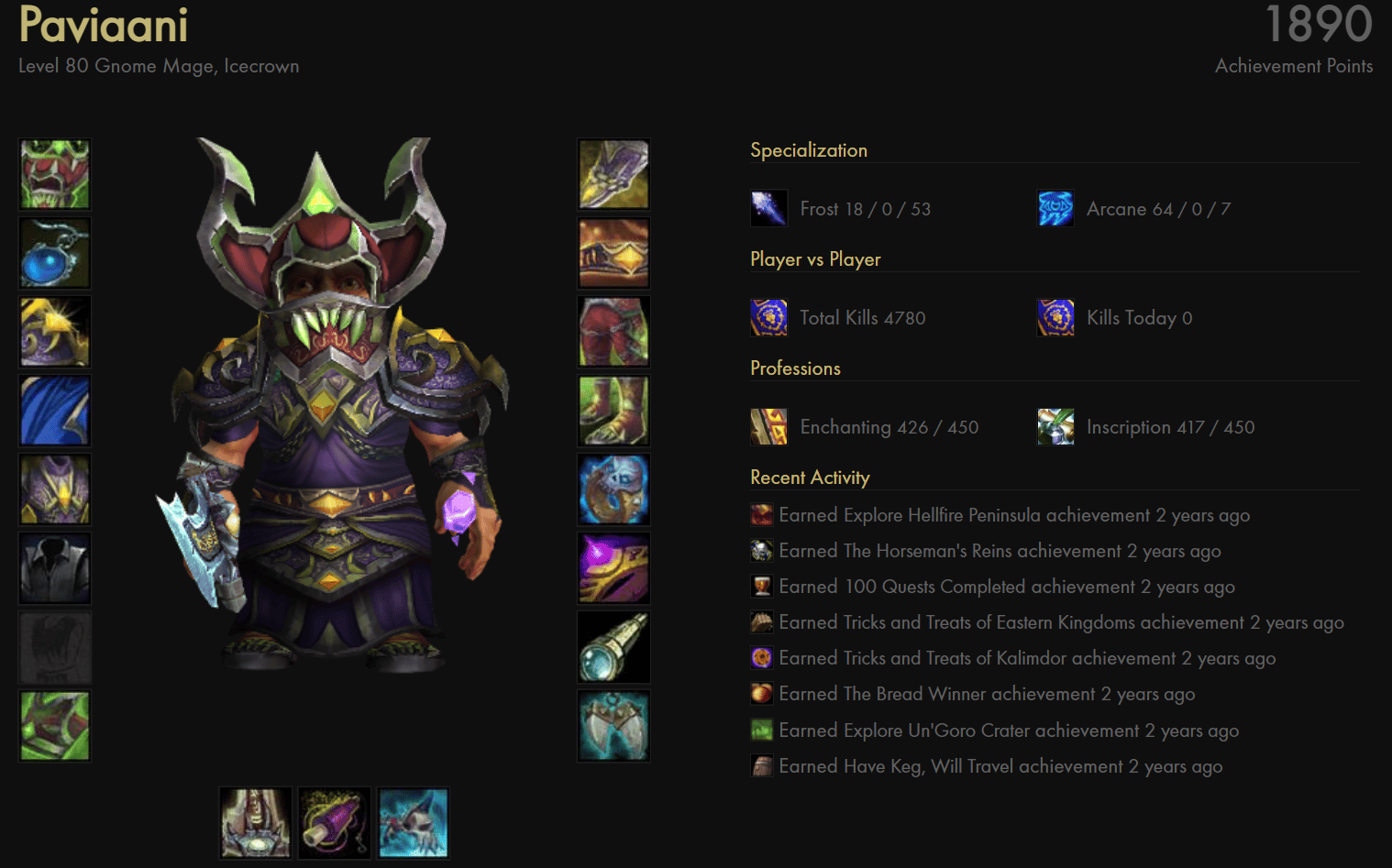 He switched to his rogue, Samperi, that I killed a couple of time too.

So he was just logging on with his rogue going in a corner, stealthed and did nothing, just to keep me busy. He thought that would go on my nerves.

Like you might know if you read my article of how we handle gankers (here), you might understand that it didn’t bother me least: I had 2 accounts at that time (I have more now), so I had one of my rogue on account 1 (Mazal) in a corner of Tanaris, one of my rogue on account 2 (Sheket – she was horde back then), same place. And from the moment I could see him come online, I came online with the one of my account I didn’t play.

From time to time, I alt-tabbed, went a little walk around and if, by chance, he was ganking, I killed him and put a flag up his ass.

After a while, he was then just in a corner not doing anything and me too, but it didn’t bother me at all.

After a while, he was online at times when he wasn’t usually online.

Again, because he thought that will bother me.

The only way to do that without getting booted by the server is to be using an anti-AFK script.

And this is forbidden by the rules of Warmane (since it is a free server, they don’t want people to occupy a place if they are not playing). So I reported him.

Then one day, he disappeared: My guess is he got banned for several months by Warmane. Probably six months.

After about six months, he came back, and he thought he’d found the solution: He was ganking on his horde character. This way, he was sure we couldn’t kill him and stop him.

He still switched to his alliance from time to time, but few minutes at the time only. I guess it was to whisper the alliance he ganked to tell them how smart he is.

He was then using the same technique: Around Zul’Farrak, ganking low levels and running away in the dungeon if things got complicated.

The End of the End

So after a while, we agreed to level some alliance rogues to stop him here, too.

We did. We also found out that there were more nice alliance players than horde players, so we switched most of our mains to alliance. Well, there is as much toxicity on alliance side as on horde, but on alliance, there is a good counterpart of nice players that eases things up. Unhappily, like at the moment, many horde gankers and noobs are switching to alliance, so that might change.

When our rogues were leveled to 80 and middle-geared, we went to Tanaris, around Zul’Farrak… And we didn’t have to wait very long… There he was!

We killed him easily, planted our flag up his ass and I whispered to him with one of my horde something like: “Guess what? We got some alliance now! Aren’t you happy to see us?”

We killed him a couple of times or three.

Then, he logged off and never logged on again. Yes, he did a log on a few months ago, just a log on and log off on all his characters so his names wouldn’t be erased, but except for that, he hasn’t been online for a year.

Some gankers can change their aim and they end up doing something else than ganking. It isn’t the case with this psycho. If he can’t gank, he can’t play.

Wonderful thing for the low lvls in the area. (Scorpyo/Mazal)