(05/06-2021) – Everything started when, on the Warmane group, a Facebook group for the Warmane’s private WoW-servers, a guy named Bardhyl Shala pretended to “purge” Lakeshire.

He had a DK, which name was erased and he spoke about how he “purged” the city. 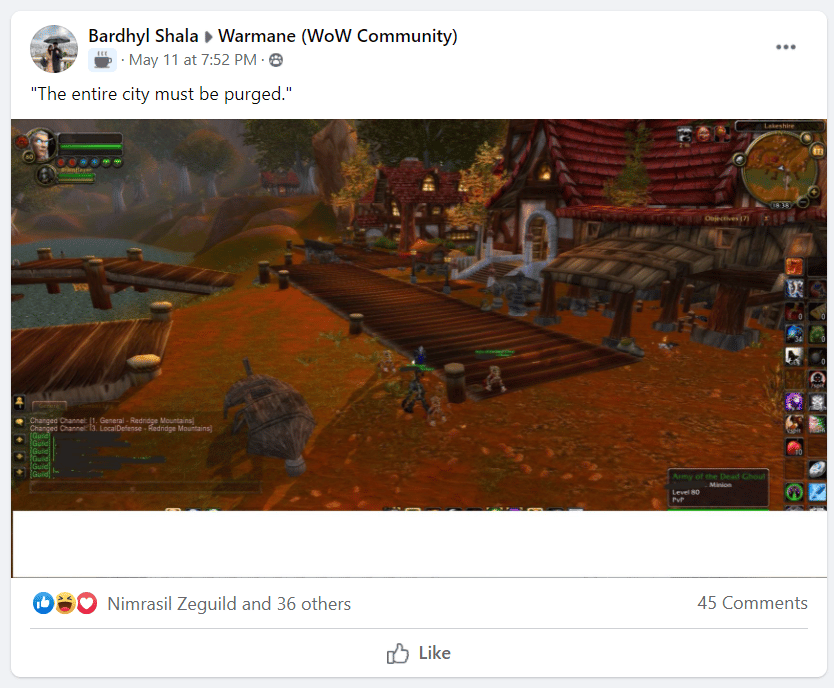 I told him, if it was on Icecrown, that was definitely because he did it while we were not online, otherwise he would rapidly have found himself in a very uncomfortable situation (with our flag up his backside, for example).

But yes, he answered, it was on Icecrown.

Then he posted a little video of how he ganked a lvl 20 gnome, and other pictures about how he loved ganking and then now, he was “purging Westfall”.

We had to stop him and give him a lesson, we thought.

But first, we had to find out of who he was, because he hid his name in all the pictures.

I checked his other messages in the group and there was one where he was asking if there was a “good ganking guild” horde side on Icecrown.

Someone answered: “Yes, W T F Unity” (which is totally true by the way).

And he answered back “Unity is not a ganking guild, I’m in it”.

Okay, so he was Male, Blood Elf Death Knight, with Glorenzelg sword (I knew it wasn’t a transmog since he asked about advice in choosing between Glorenzelg or Wrathful)

There was only two male Blood Elf Death Knights in W T F Unity at the time, both with Glorenzelg, but their helmet were different. Nimrasil found that the one’s helmet was identical to the one in the picture.

We found our man: Agronius. 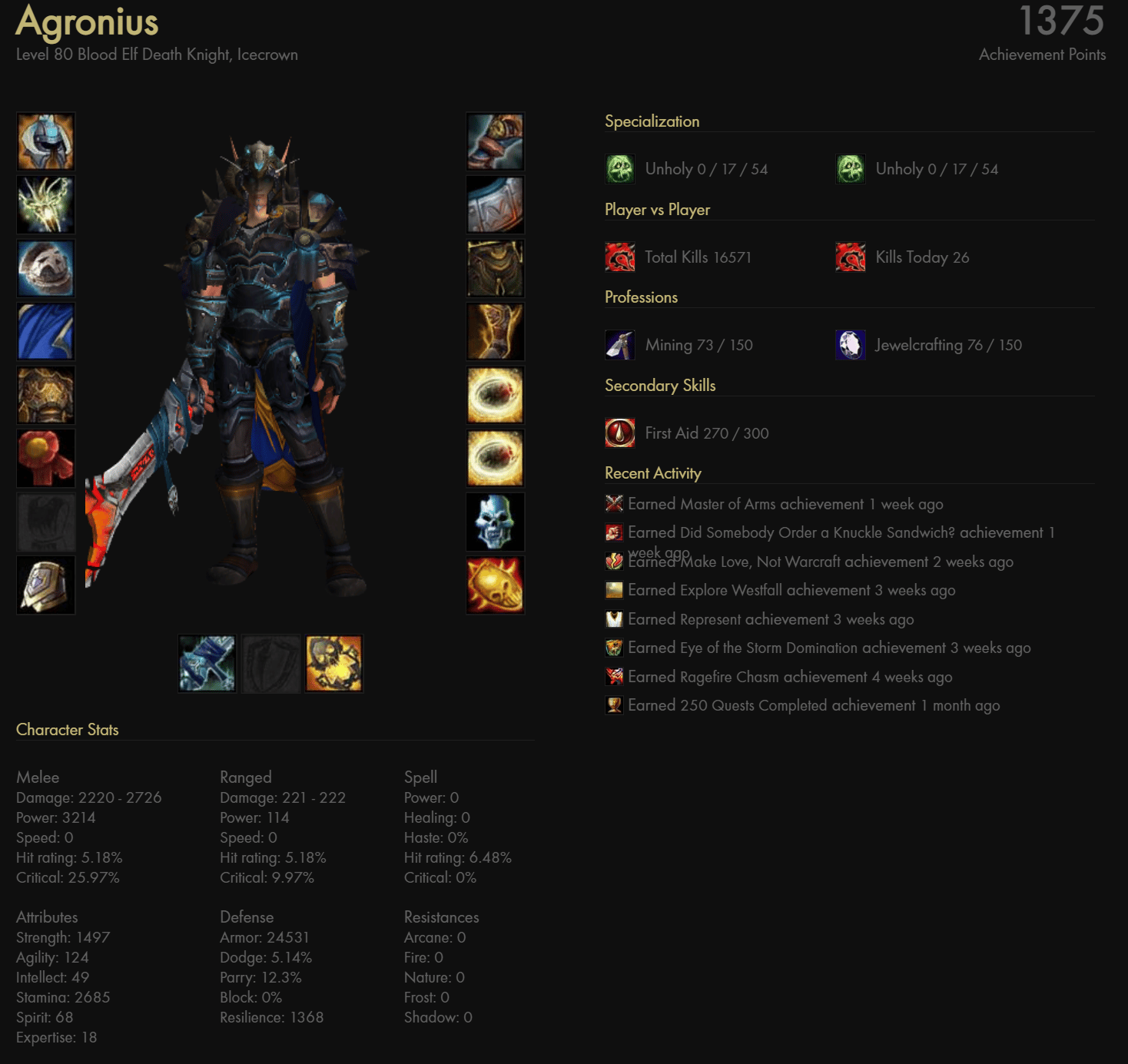 I put his name on my horde spy’s ganker list, we moved to Westfall with our Death Knights since he said he was there, and we just waited for him to show up.

He did… But when he saw me, he rode so fast we couldn’t catch up with him. He couldn’t even possibly see we were two at the time, not even that he dared.

After trying to catch him several times, we found out that Agronius was maybe good at ganking, even better at fleeing, but we couldn’t see how good he was at fighting because we still had to see it.

We spend a while waiting for him, but he didn’t show up as long as we were there. He only came while we were logged off, but disappeared as soon as we showed up.

We found out, at the end, that he had a lvl 20’ish alliance paladin, Arafelia, in Westfall.

The role of Arafelia was simple: his char was with the PvP flag on and challenged other people to duel. When they duel someone in PvP, they come in PvP themselves. Then he showed up with his Death Knight and killed them.

Beside that, Arafelia could see if we were here or not.

So we agreed to go with one of my rogue, Silah (subtlety), which wasn’t geared at the time (still isn’t but she will be) and Nim’s warrior Galiyah, that she hasn’t played in a year, but she is geared and since it is a Night Elf, she can shadowmeld.

I stealthed, she shadowmelded at a strategic place, we logged off, and waited for my spy to tell me he was on his way.

The fight was short and after a few seconds, Agronius’ body lied down with our flag up his backside.

He switched to Arafelia to mock that we were 2 vs. 1.

Funny how all these gankers have a weird sense of fairness. It’s totally fair for them to need a Death Knight with 35k hit points to gank a level 19, but it is unfair to be 2 vs. 1.

Well, like Nim says: If we could come with just one who is 50 level over them (like it is the case when they gank), we would, but it can’t be, so… we settle for the next best.

Besides, they don’t play fair, I don’t see why we should. But it is “ganker logic” and they (almost) all whine about the same thing.

Anyway, we restealthed, re-shadowmeld, Arafelia went off-line, Agronius came back online and “hoped to ride”, but got stunlock, killed and flagged one more time. 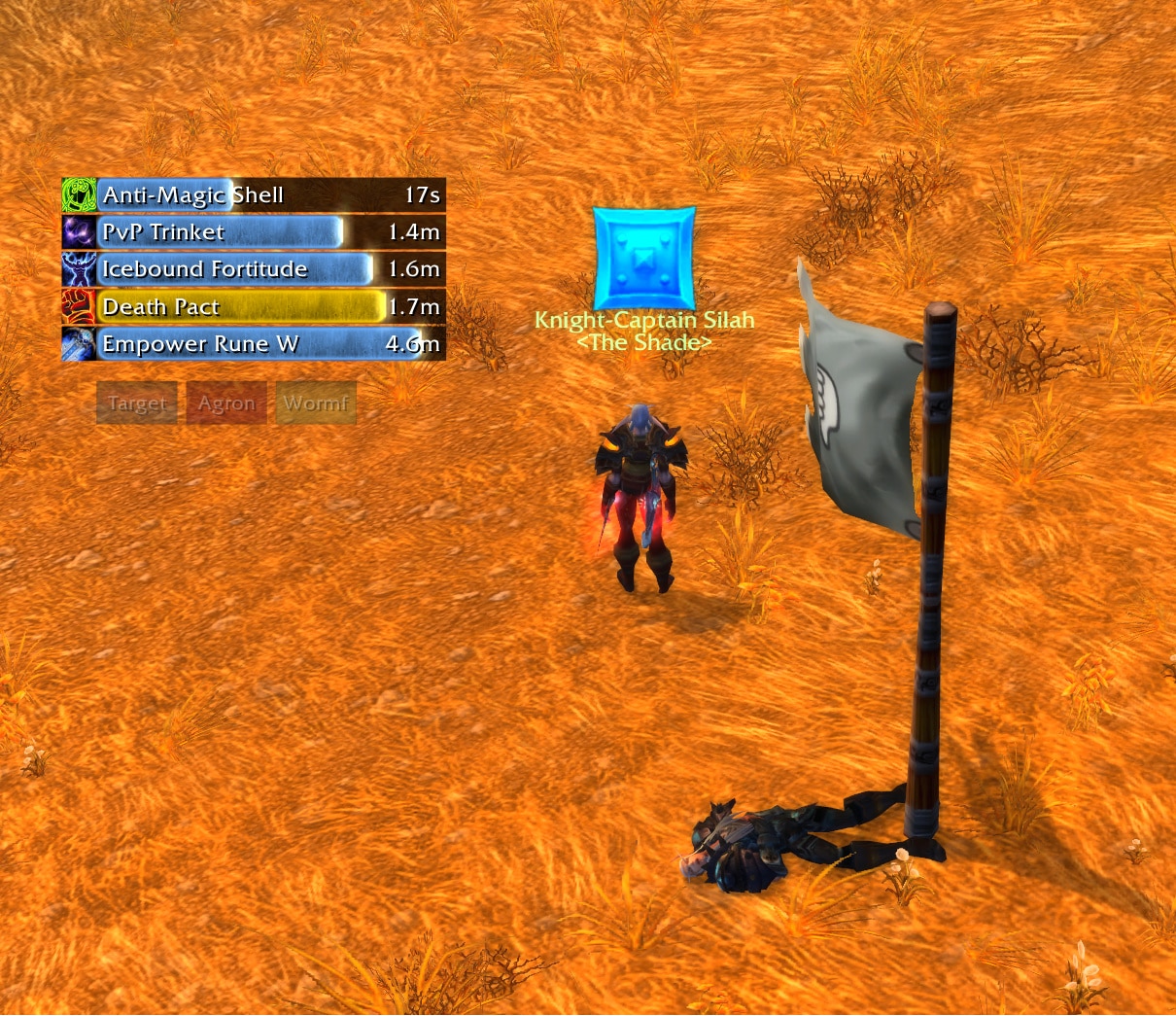 I switched to my horde and whispered him that I now had several pictures of him with my flag up his ass, that the next time he would try to gank, same thing will happen and that if he ever posted again his “purging-bullshit” on Facebook, I would post the pictures.

I saw him shortly online later, in Dalaran or something. But never in any ganking place anymore. And no, at least to this date, he hasn’t posted any “bragging-ganking-picture” on Warmane’s Facebook.

When I went on Armory to take his picture, it looks like he is not in W T F Unity anymore. It looks like he’s done ganking. Anyway, if he is not, we’ll meet again and we’ll be “binge killing the purger”. Wanna bet? (Scorpyo)