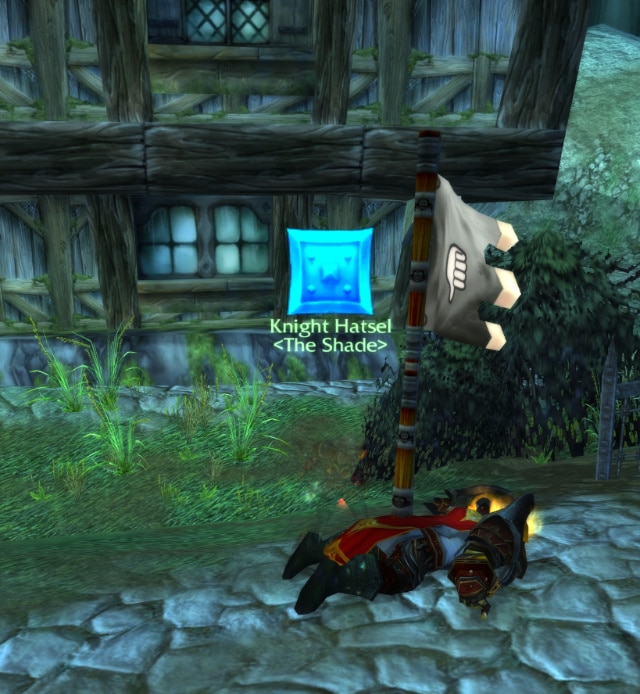 Guderian is a rogue and a ganker, like many, but there is a little twist to him: He’s a nazi.

He has his guild, with only one member, Guderian.

His guild’s name is “PANZER DVSN TOTENKOPF” (Yups, he didn’t find the write-with-small-caps-button on his keyboard).

The 3rd SS Panzer Division “Totenkopf” was one of 38 divisions of the Waffen-SS of Nazi Germany during World War II. Its name, Totenkopf, is German for “death’s head” – the skull and crossbones symbol – and it is thus sometimes referred to as the Death’s Head Division.

The division was formed through the expansion of Kampfgruppe Eicke, a battle group named – in keeping with German military practice – after its commander, Theodor Eicke. Most of the battle group’s personnel had been transferred to the Waffen SS from concentration camp guard units, which were known collectively as SS-Totenkopfverbände; others were former members of Selbstschutz: ethnic German militias that had committed war crimes in Poland.

The division became notorious for its brutality, and committed numerous war crimes, including the Le Paradis massacre. (Wikipedia)

Guderian was placed in charge of the “Court of Honour” by Hitler, which in the aftermath of the plot was used to dismiss people from the military so they could be tried in the “People’s Court” and executed. He was Hitler’s personal advisor on the Eastern Front and became closely associated with the Nazi regime. Guderian’s troops carried out the criminal Commissar Order during Barbarossa, and he was implicated in the commission of reprisals after the Warsaw Uprising of 1944. (Wikipedia)

Then, little by little, we met several of our little nazi-loser’s alts.

There is a Death Knight, Karlwolff. Also, this name is a reference to a nazi:

Karl Friedrich Otto Wolff (13 May 1900 – 17 July 1984) was a German SS functionary and war criminal. He was Chief of Personal Staff Reichsführer-SS (Heinrich Himmler) and an SS liaison to Adolf Hitler until his replacement in 1943. He ended World War II as the Supreme SS and Police Leader in occupied Italy. He escaped prosecution at the Nuremberg Trials, apparently as a result of his participation in Operation Sunrise. In 1964, Wolff was convicted and imprisoned for war crimes in West Germany; he was released in 1971. (Wikipedia) 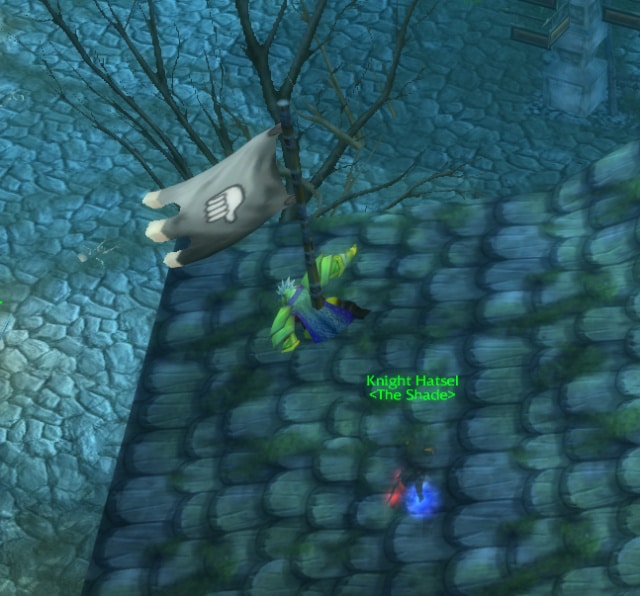 And, last but not least, a level 50’ish (at the time of writing) hunter named “Arianblood”.

Now, our little nazi-friend is much better at finding names than at PvP’ing and this is why the only thing he is doing is ganking. With everyone of the above mentioned characters. He is principally ganking in Darkshire and in Lakeshire.

When we have killed him enough time he goes to the Dark Portal, but I guess it is not that fun because there is often level 80 players there and ganking is more complicated than in low level cities.

According to statistics, between my different rogues and Guderian and Karlwolff, I killed him 35 times, and he… none. I killed his Arianoob a three or five times, but I didn’t count it. 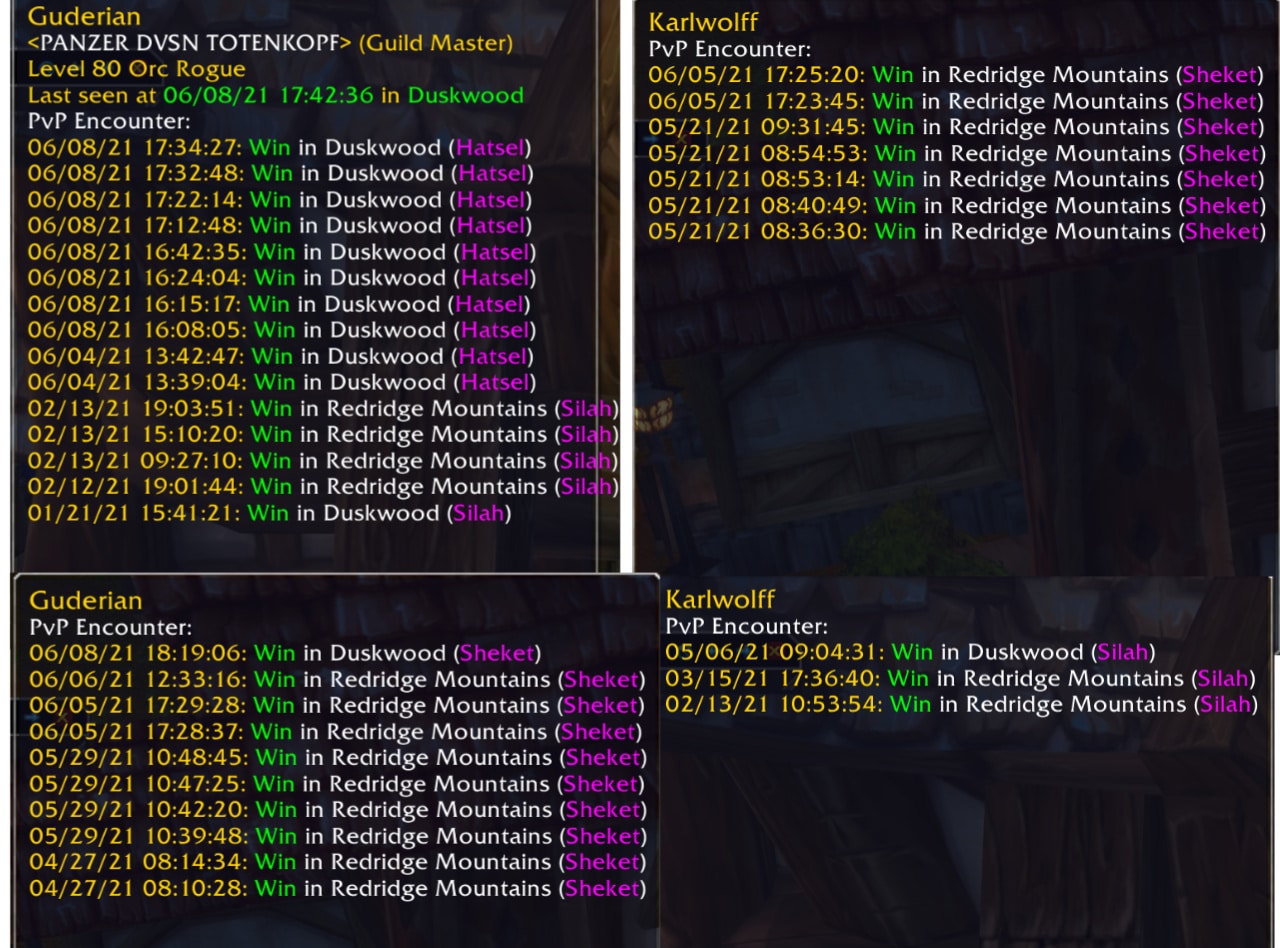 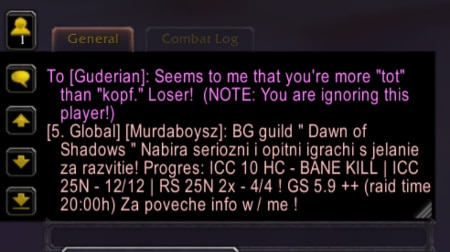 Yeps! Like Nim told him… He was more Tot than kopf 😉

But the fact that he is an easy kill is not the spicy part.

The most spicy part is that the name of my rogue, Sheket, means “Silence” in… Hebrew. The name of my other rogue, Hatsel, means “the shadow” in Hebrew. And the name “Silah” is actually derived from “Hatsel”. My mate’s name, Tsella, is also derived from the Hebrew “Hatsel”.

Yups: Not only our little nazi-loser is killed by Jews, but by Israeli-Jews.

That can only give us even more pleasure. Maybe I should have used another flag? Like this one? 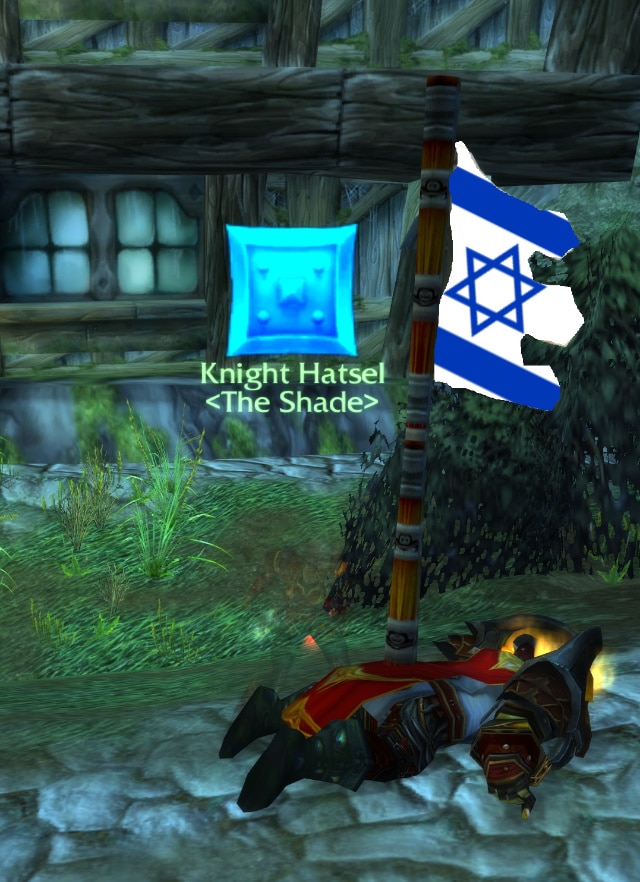 Oh, and by the way, I reported his name and guild’s name to Warmane. They wrote back, they’ll look into it. I don’t know yet if they’ll take action, but we soon will find out, I guess. Shalom, shalom Guderianoob. We’ll “meat” you again!

Update from the 10th of June: I noticed that our little nazi got a free name change from Warmane and is now “Murtalos” and that his nazi-guild doesn’t exist anymore 🙂 We’re very happy to see that. (Scorpyo)

3 thoughts on “Nazi-Cleaning in Azeroth”