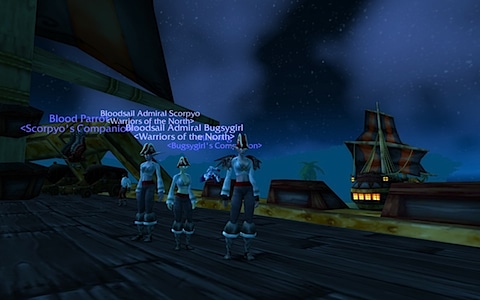 Nimrasil, Bugsygirl and Scorpyo agreed to get the Bloodsail Admiral title. It is a title you get by being friendly with the Bloodsail Buccaneers (near Booty Bay), Goblin’s sworned enemys.

To reverse that, you have to kill goblins, in Booty Bay mainly.

When your reputation with the Buccaneers is up to neutral, you can get most of the buccaneer’s equipment: shirt, shoes, etc. All except from the hat and the title.

To get the hat, from where you can extract a parrot, you have to be friendly with the buccaneers. Then you’ll have a quest called “Avast Ye, Admiral”.

To do this quest, you have to kill Baron Revilgaz and Fleet Master Seahorn (located outside, top of the inn). So you have to work your way back at Booty Bay, fight all the bruisers and questgivers that attack you, get up, kill the Revilgaz and Seahorn and then… well… better jump into the water instead of fighting your way back.

When you get back to Fleet Master Firallon (on the middle one of the 3 ships near Booty Bay), you get your title, achievement and the magic hat.

It can take a long time to get the title. Most people at level 80 (don’t expect to take it much before as the bruisers attack as group and are lvl 77) have a reputation at around 32,000 – 34,000 hated. Each bruiser you take on gives you +25 reputation.

You have then to go from

For most people, that means killing around 1,440 bruisers.

We found a place where the bruisers respawn real fast so after 2 hours, Bugsygirl and Nimrasil had the Friendly status and could in fact get the title.

Scorpyo, who had been a real bad girl, was down at around 23,000, so she had to get 12,000 just to get to hostile. When Bugsygirl and Nim were friendly, Scorpyo was still Hated. But they decided to stay and help Scorpyo out.

After 4 hours of work, around 4 hours, the 3 of us got their nice hat and title. Here is the picture (clic on the picture to see it in reaaal big) and a little movie about it.

Later the same night, BlackScorpyo went there and got the title too. It took around 2 hours. There is a trick… of course.