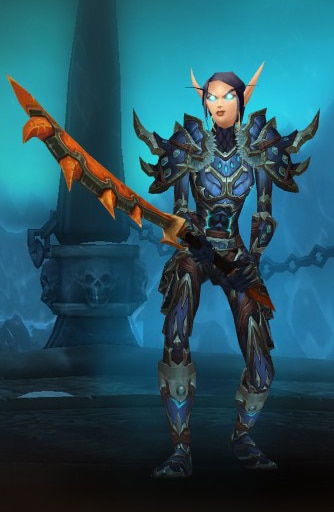 (13/02-2014) – Sometimes, in WoW, just like in anything else, you might get into a state of “baaaaûûûûm”, you, know, if you do a lot of repetitive actions, then you get the combo in your fingers which just run on the keyboard and you think of something else while killing, gathering arrows or any other stupid thing.

I remember once, I was boosting a friend in Wailing Caverns with my Blood-Elf death knight. We were on our way out and I was just chain-killing the dinosaures on our way out: Tab -Icy Touch – Tab – Icy Touch – Tab <Ho? I didn’t remember there were bears in here> – Icy Touch <Nyaaaaaaaah> (the very dramatic sound of a Night Elf hunter dying). In my mantra I reacted too slowly and ganked a poor hunter surely going after the skinning, I apologized but… erh… It was kind of late…

Well, almost the same thing happened to me again last saturday. I was leveling my Death Knight, Blackfate (yes a Blood Elf! So what?) with Nimrasil who was with her Disc Priest (Triest). We were level 88 and in Towlong Steppes, you know, the quest where you have to kill some scorpions and gather 120 arrows?

Well, I was chain-deathgripping the scorpions and chain-killing them, when I actually deathgripped a scorpion who was mounted on a pigeon of a kind. There was a kind of… emptiness for a few seconds where my thought went really quick:

Happily, this hunter, Ralegh, wasn’t a noob and had come to the conclusion that this must have been a mistake… A BIIIIG mistake, and he might have been very surprised to be pulled to me on his mount.

He was obviously quite calm too and didn’t do a thing in the handful of seconds it took me to understand what was happening. I excused myself and he grined gently at me and flew away.

Pfeeeeeew… That was close. There has been a growing number of gankers on Defias Brotherhood the last couple of months, so it was nice to see that not all Alliances are gankers (even though in this case, it would have been half-legit to “misunderstand” me and kill us both). Such fair-play experiences are nice.