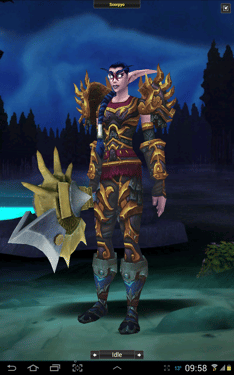 Scorpyo is actually hitting hard and I was moving a lot, using colossus smash to get away and then charge him back and hit him again and again.

He even tried to take his Army of Death out. but I am not a bladestorm warrior, but a shockwave one. This because there was a time where bladestorm didn’t do enough damage. Even though it is better now than it has been, I have got used to shockwave, which gives this extra stun, so I kept it.

So the cow had time to take two or three ghouls out before he got shocked and couldn’t get more. A couple of hits, my crit-flag up, my crit-buff up, and then execute was ready… Exit tauren. He died miserably.

All right! Then I would stay!

Since I was very, very low on health, I made a pandarian buffet (yeah, I didn’t have any regular food left… So?) and eat, but even there, I still was a bit under 2/3 health… Anyway; I’d better get my other mobs to get rank.

I began to walk to the other end of the bridge, and there he was again, full health, on his mount.

Guess what he did?

Yes! He deathgripped me (how did you guess?)

He died nicely a second time after a shorter fight than earlier. I guess he didn’t have much cooldown left and he obviously wasn’t very good at runepower management. I was under the impression that he was just mashing random keys on the keyboard, yelling “Diiiiie you motherfucka!” (or something like this)… Maybe he was slightly upset too… I am not sure.

Anyway, I eat a second banquet and since I wasn’t that low on health, I got on full health. Then I saw that southern tower was under attack. I guess he preferred to kill NPCs to get rank.

I went looking for him, but he wasn’t there. Okay… Then I could smash the towers. I went to the eastern workshop to take it (all four workshops were Horde) to get my vehicle.

Guess who I found there?

Yups, my death knight (how did you guess that too? You, guys, must have an einsteinic intelligence!) who just made a vehicle. He was on his way out. Okay, so Scorpyo began to hit the vehicle.

Instead of just keeping driving towards the fortress, the Tauren began to hit me with his vehicle. He was using a siege machine to try to kill me. Something tells me he was really mad at me and wanted me dead.

He got me down to a bit over half and decided it was safe enough for him to finish me off by hand. He jumped out and we began to fight. I got him down to around 1/3 health, but I had be pretty much down a couple of times myself (Scorpyo is an herbalist, so I got her up with a couple of healings, but even then, it was getting dangerously low). So I decided to run away to get some health.

He sent his ghoul after me to finish me off.

But the ghoul is stupid. It is thinking like an NPC: I shadowmelded and the ghoul got off me and came back to his master. I ate a bit and went back to fight. He was making a second machine and he began to drive… Almost same scenario as before. With the difference than instead of sending his ghoul after me, he was just running after me.

So there I was in Wintergrasp, running at a good pace with a cow and a ghoul running after me. No problem, I could use colossus smash to go further away from him. Eat full health, back to workshop…

He left the battle.

Then it was no problem getting vehicles, smashing towers and keeping the fortress.

P.S.: Don’t make any mistake, I use as much humor to explain when I get pwned. See, for example, this one.

1 thought on “Yes, There CAN Be Epic Wintergrasp!”