She was born in the same little night elf village like her sisters, of course. But she quickly moved to the big city, Darnassus.

While her big sisters Laylael and Nimrasil would remember exploring their childhood area, listening to birds and deers and the beautiful melodies that hung in the air, she didn’t really recall anything from her early years.

When she was ten, things changed though.

She was told to start working, and she took up two professions that suited her well: Tailoring and Jewelcrafting.

She also discovered an awesome place to go, and that’s where she spend the rest of her childhood, all her youth and a huge part of her adult life: the battleground!

Triest grew up on the different battlegrounds and learned to kill and to heal.

When she was 48, still young for a night elf, she moved from Blade’s Edge (EU) to Sporeggar, a real realm where they didn’t only fight on battlegrounds, but where ever there was a spot shared between horde and alliance. She didn’t get into any fights, though.

She grew up to 72, but then she was left alone for two years. Nobody cared about her. Her sisters were sleeping, too. Laylael had followed her to Sporeggar, but Nimrasil and her half-sister Nezepher had stayed on Blade’s Edge. Triest was sad.

Then one day, things started to happen again. She was taken away, once more. She and her sister Laylael moved to a French country called Culte de la Rive Noire, and there she started to live a bit again. Instead of healing, she tried being more aggressive and showed her dark, shady, side. Only for a short while, though, from she was about 73 to 74.

Then things happened in a blur… She reached 85, but where? On the French realm? Or back on Sporeggar with her sisters? She couldn’t remember. And then she was left alone again and feeling sad once more. 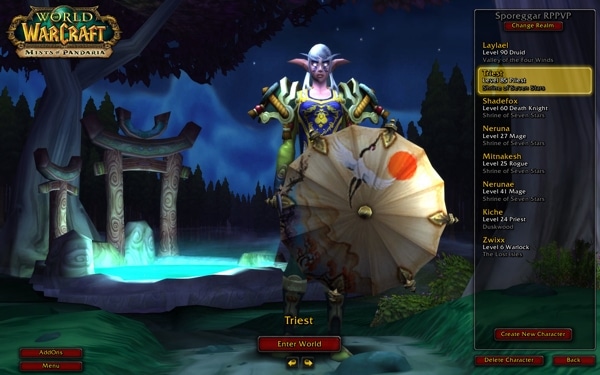 Somebody moved her, again. She was so tired of moving. For three days she didn’t even have a name. Then she got it back. She was again Triest, but where? On Defias Brotherhood? And oh… What is that? What’s going on? 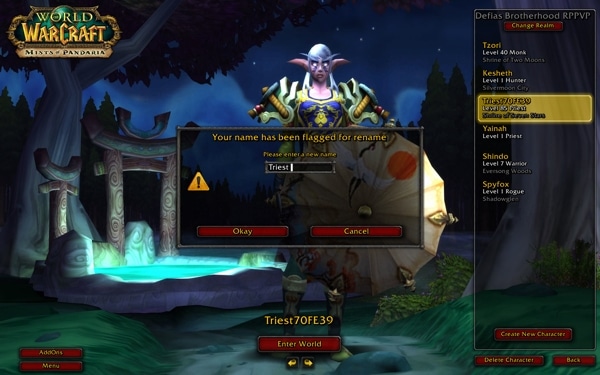 She looked in the mirror. She was the same inside, but feeling different somehow. She didn’t really know what it was. Sure, same hair color. Same hair style. Same gentle face… but where were her markings? And her eyes? They were no longer white and blinded by the light. They had turned green as emerald. Her ears were a bit shorter. She was thinner – must have been all that starving.

She stepped outside, but this wasn’t Stormwind. Nor Darnassus, the only city she really remembered. This was a strange city. She cried a bit. Her sister Laylael wasn’t with her. Nimrasil had left a long time ago, but she’d always been close to Laylael. Should the two of them never see each other again? 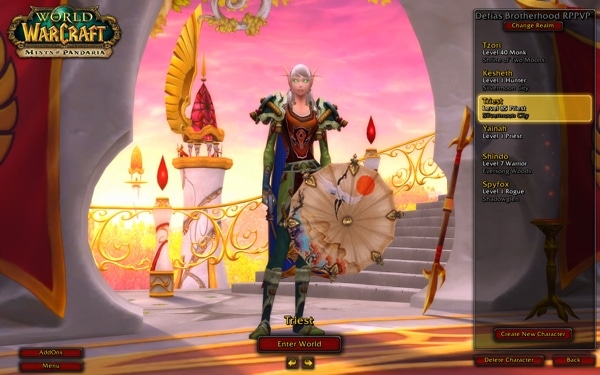 Triest swallowed. She wouldn’t allow herself to cry for long. She took a deep breath, and that’s when she saw her… New friends. New allies… but this time in a strange place. This was Silvermoon, her new home town, she was told.

She opened up her arms and hugged her new friends. Ready for new adventures. Maybe she would finally be happy and no longer alone? She hoped so.

1 thought on “The Day Triest Switched Faction and Became Horde”