Here is the movie (27 seconds) of the moment, it happened.

Of course, there was a party to celebrate that and it was arranged by Nimrasil, who came as one of her alts, Nezepher. No one knew what was going to happen on that party, so we had to follow her.

We met at Ironforge and Nez drove us to the frozen sea at eastern Dun Morogh. After a short speech, came the point. In short it was:

– Since paladins are almost invincible and unbearable, except from Palsass (Nim-dwarf-lover channeling, I suppose?), we can as well take it up as a fair fight.

In short: Everyone rolled to find an order, and Lehiya had to challenge them to duel. If she lost, no problems, if she won, she had to take off one piece of armor and drink one Nethergarde Bitter and duel the next.

This is about what Lehiya could see: 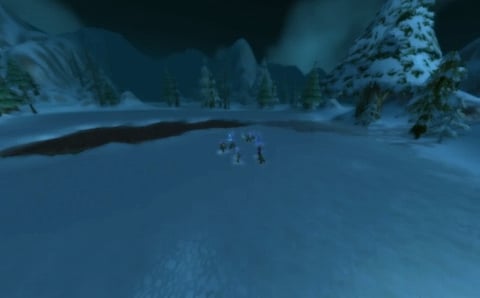 A real fun party. Thank you very much to everyone, it was real fun and I was very very happy for the party. You guys, rock!