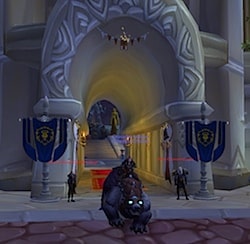 (22/09-2010) – Lehiya, who wasn’t very active when she was Draenei on Blade’s Edge, surely became real active since she moved to Horde on Stormscale.

At first, we were only 3 or 4 and the only other level 80 I knew on Stormscale said something about Real Life things, so he couldn’t come.

We spammed Trade and LookingForGroup and in about 20 minutes, we had 40 level 80s ready to go (in fact, there was one level 61 and one level 71 leeching on us, but we could take it – rest was level 80s only).

It was first in the evening, so I expected some resistance.

The only resistance we met was in Darnassus, when one single Night Elf druid (level 80, though) tried to stop the 40 of us single handed.

Must have been like trying to stop a truck with your forehead: Rambo got smashed, of course.

We came by the harbor – we met at Westfall, “walked over the water with Path of Frost” until the harbor, got the king. Then tram to Ironforge.

After we downed the dwarf king we went back to the tram, crossed all Stormwind again back to the harbor. Stormwind was surely horde territory at the time. Even when I lost track of the rest of the group (we were only a little group of 3 or 4), we didn’t get stopped.

Well, seen from my Alliance character’s point of view, it doesn’t surprise me. I always had great difficulties to gather people to some PvP, but I had expected more resistance since Stormscale is a PvP realm… But no. Everyone just went by their business.

From the harbor, we took the boat to Auberdine, then Darnassus, where Rambo tried to stop us (on the other hand, I imagine he wouldn’t be able to gather a raid group big enough to stop us, especially not for Darnassus).

Since Darnassus is my favorite city and Night Elves (with Bloodelves) my favorite race, I almost didn’t hit the high priestess. Had to, not to be doing nothing, but not more than most necessary so no one noticed.

After that, back to Auberdine and to the Exodar. No problems here.

I would say that the whole raid didn’t took more than one hour. No resistance at all, the trip was what took most time.

I think I am more Horde at heart than Alliance. I don’t understand this passivity at all. Not even on a PvP realm, they try to fight.

No wonder Lehiya is showing a special part of her bear’s anatomy to The Silver Convenant’s entrance.