The Oathbound Paladin is a relatively new class in Neverwinter. And therefore is it OP at the moment.

My paladin, Galit, is pure PvP-breed, but my feats and powers might be a mixture, since I’m new to this. I’m simply sharing my build here to help a friend, who’s completely new to MMORPGs and who wants to create a paladin.

The Oathbound Paladin (paladin or pally from now on) can serve three roles:

I chose to go DPS with some healing capacity, but I’ve heard that the tank build also works fine in PvP.

At first, I followed a guide. Unfortunately, the guy who made it, is a PvE player, so some of his advice doesn’t work, like speccing for power and crit.

When you get PvP gear that’s not an option.

As you level up, you learn more and more spells. At first, you don’t really have the choice, but must take what you can get. But later on, you can pick the spells or abilities that fit you the best.

The spells and abilities I use

My pally is level 36 right now, and I use the following:

Encounters: Sacred Weapon (Q), Templar’s Wrath (E) and Smite (R) – (I have T as keybinding, and not E, to be honest, but that’s because I move forward with E instead of W.)

Class Features: Aura of Courage and Aura of Wisdom.

I use the Tab key to heal myself and my party, and the same with Smite. Smite has the extra advantage of hitting the enemy on his head. I’m not of much help here, I’m afraid. I was told to use Dark, Silvery and Radian enchantments.

And that Regeneration was better than Lifesteal.

At first, you need to use the powers you get. You don’t really have a choice. So you’ll have to spend 2 points in all powers to begin with.

Later on, you can choose the ones you use and go up to three and four points.

Since I don’t have a PvP guide to follow, I went with PvE powers at first, but I think I’ll try things like Aura of Vengeance (maybe) and Cleansing Touch later (instead of Sacred Weapon). As for the feats (and the rest until I make changes), I’m following this PvE guide.

Even though I’m going DPS, I started out with some of the healing feats, because that always come handy in PvP.

Click on the image below to see a bigger version. I have none yet.

There’s never a rotation when it comes to PvP. You have to react to the moment. But this PvE rotation might guide you. Again, I got it from the guide.

I’m not sure what he calls “auto attack” but I use left mouse at that point.

Also, when needed and depending on what’s going on, and if they are available, I use the daily spells:

Divine Judgement (1) to hurt them and Heroism (2) when we need an extra health boost.

That’s what I got so far. I hope to be able to add more info later. 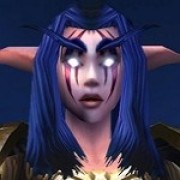